Lots more riders, but no cash time for TTC to do smart stuff like separate bus lanes to stop delays and move more people 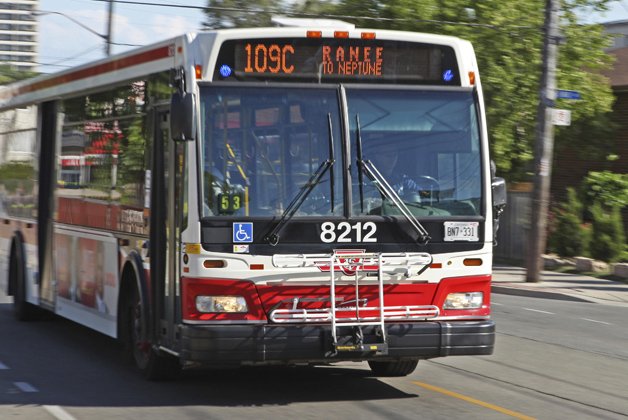 Last week, the TTC Commission approved the 2013 budget in principle. The total approved budget is $1.55 billion, funded by $411 million from the city – a flatlined amount despite inflation and, more importantly, despite growing ridership.

Absent here is the province, which contributes nothing to the operation of the TTC.

Instead, riders are left to shoulder the rest, paying fully 73 per cent of the cost of running the TTC, the highest proportion in the developed world.

So while there’s talk at Queen’s Park and City Hall about magical sums of money for transit expansion, the system that is actually moving 1.6 million trips a day and growing is overburdened and can’t put enough buses on the road to carry the growing ridership.

With 25 million new riders expected in 2013, on top of large growth in previous years, the TTC needs to figure out a way to meet demand while improving efficiency.

This new ridership alone should cost $20 million to $25 million to accommodate the TTC budget doesn’t envision adding any new service.

The way out would be for the TTC to do more with existing staff and equipment. This wouldn’t require outsourcing staff, a move that would save a very small amount of money, lose the good will of the TTC’s roughly 10,000 unionized workers and lower productivity. We’d all pay the price for a demoralized workforce. The better solution is to make existing routes run better and more efficiently, and the place to start is bus service.

The average bus costs about $360,000 to operate for a year, including repairs, gas and drivers’ salaries. But for every minute a bus is stuck in traffic, there is a cost. In fact, TTC staff generally assume that increased traffic is responsible for the need to add about 1 per cent yearly to the entire service budget.

Basically, we need new bus lanes along clogged arteries. A program of 50 to 100 kilometres of such lanes could be implemented quickly on a trial basis for less than $100,000 per km without physical separation. The total cost would be $5 to $10 million.

If well placed, these lanes would allow vehicles to make more round trips and thus carry more people. If they were properly enforced, perhaps with cameras and the use of coloured paving (which in New York created a 30 per cent decrease in illegal bus lane use), we could get much more out of our $900 million worth of buses.

Likewise, the TTC’s decision to use about 150 articulated buses (double buses joined) will help because such vehicles carry about 50 per cent more than regular 40-foot buses, with only slightly higher operating costs.

However, in order to get the most out of the new articulated buses, the Commission needs to move forward on all-door loading, which would further increase efficiency.

Of course, this must be backed up by fare enforcement, with special constables checking one in 20 passengers. This is only fair many Torontonians struggle to make ends meet yet pay the hefty cost of a Metropass.

Fare evasion is currently expected to cost the TTC $20 to $30 million, and while not all of that is stoppable, $1 to $2 million spent on enforcement activities could yield savings of $6 to $10 million a year. Concerns about equity are valid, but other ways of addressing the needs of low-income riders who have trouble paying their fare have to be found.

Sometimes improving customer service also helps the budget. Making buses run on time prevents gaps and bunching. Keeping vehicles moving as evenly as possible would save the equivalent of two to three buses, at least on busy lines like Finch West or Dufferin.

All these changes would likely deal with the recent surge in ridership without having to add more vehicles – even without the new articulated buses, which won’t be delivered for a year and a half.

As well, an updated schedule monitoring program would cost around $5 million in new electronic equipment and supervisors to implement it, but could easily be expected to save the equivalent of more than 15 to 20 buses, for annual gross savings of about $7 million and a net saving (once new supervisory costs were factored in) of at least $1 to $2 million.

Another way of getting the buses moving more efficiently would be to install Transit Signal Priority (TSP) at 1,150 intersections the TTC has identified. This allows vehicles to trigger a mechanism that holds or advances a light.

If transit vehicles had this equipment across Toronto, it would save the equivalent of about 45 buses in the morning rush hour, 40 throughout the day and more than 50 in the evening rush hour.

TSP allows transit vehicles to complete their trips faster, leading to more daily trips, improved schedule reliability and less bunching. The cost of implementing TPS would be $18 million or so, but the saving from not using between 40 and 55 buses a day is worth over $16 million in one year alone.

Finally, the TTC should work with the city to implement the Integrated Transportation Plan that was adopted some years ago by council. It calls for the reduction of left-hand turns, shortening on-street parking (and moving into off-street lots) as well as other traffic management techniques that would move all traffic better, including TTC buses and streetcars.

Overall, using new, small, targeted spending, the TTC could actually accommodate growing ridership and, in a year or two, carry more people with fewer vehicles. These ideas aren’t new, but they need a Commission and council serious about getting us moving.