On the record: the Aga Khan’s call for multiculturalism 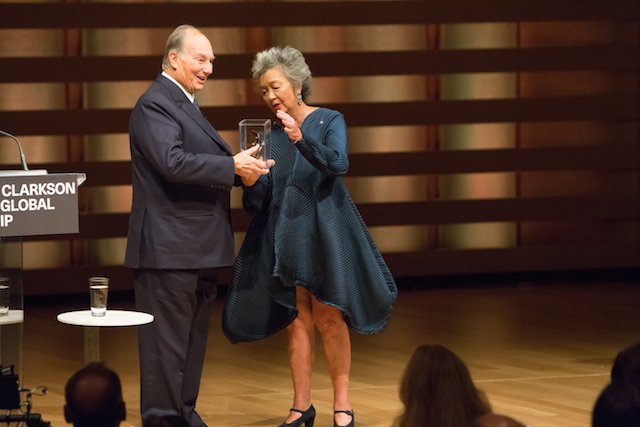 His Highness the Aga Khan was given the inaugural Adrienne Clarkson Prize for Global Citizenship at a ceremony at Toronto’s Koerner Hall Tuesday, September 20. In his acceptance speech, the spiritual leader of Ismaili Muslims around the world warned of the threats to pluralism in Canada and abroad in the age of mass migration, Brexit, Donald Trump and the explosion of information technology. Below is an slightly edited and condensed excerpt from his address. The subheads have been added.

Of diversity and division

The stakes seem to be getting higher to the ideals of global citizenship.

More people are moving, willingly and unwillingly, across national frontiers than ever before. In country after country, the migration question is a central issue of political life. Often it is the central issue.

And old habits of mind, including narrow, exclusionary definitions of citizenship, have not met the challenge.

That was true three months ago when Great Britain voted to leave the European Union. It is true in pre-election debates in France, where I now live, and in the United States, where I went to university.

It is true in Canada, though Canada has certainly been a world leader in expanding the concept of citizenship. But the challenge is felt everywhere. Nor is the migration challenge likely to dissipate any time soon, especially as war, violence, and economic deprivation, displace more and more people.

Fear of the “other”

In such a world, the “other” is no longer a distant someone whom we encounter primarily in the pages of a magazine, or on a video screen, or an exotic holiday trip. The “other” increasingly is someone who appears in what we think of as “our space,” or even, “in our face.”

When the other is seen as a potential competitor, for a job for example, even when this fear is unfounded, it is tempting to look for scapegoats, for someone to blame, when our self-esteem seems threatened. Often, we then find it easier to define our identity by what we are against, than by what we are for.

Such fears may be culturally based, or economically driven, or psychologically rooted. But they should not be underestimated. And they will not be driven away by nice sounding words proclaiming lofty ideals.

This is why I would emphasize our responsibility to improve the quality of life in places throughout the world – fighting poverty, improving health and education, expanding opportunity – as the first manifestation of a healthy pluralistic ethic. Pluralism means responding to diversity not only at home, but on a global basis.

But the growing challenge to pluralistic values does not happen only when people move physically from one place to another.

Technology won’t save us

As new technologies shrink the planet, distant forces become dire threats. We worry about the perils of environmental degradation, for example. We see how every local economy can be affected by distant economies. We realize how dangerous forces – deadly diseases, or deadly weaponry, criminal networks or terrorist threats – can spread across national borders. And often, the human impulse is to withdraw from a threatening world.

One element that complicates this challenge is the way in which we communicate with our global neighbours.

We think sometimes that the new technologies can save us. If we can connect faster, at lower cost, across greater distances, with more people, just think what could happen! We would all learn more about one another and perhaps understand one another better.

But I am not sure that things are working out that way. The explosion of available information often means less focus on relevant information, and even a surfeit of misinformation. Thoughtful leadership often gives way to noisy chatter.

Media proliferation is another challenge. What it often means is media fragmentation.

Many now live in their own media bubbles, resisting diverse views.

Realities of identity are more than skin deep

Yet another dimension of the challenge has to do with the realities of human nature. We often hear in discussions of global citizenship that people are basically alike. Under the skin, deep in our hearts, we are all brothers and sisters – we are told – and the secret to a harmonious world is to ignore our differences and to emphasize our similarities.

What worries me is when some take that message to mean that our differences are trivial, that they can be ignored, and eventually erased. And that is not good advice. In fact, it is impossible.

Yes, our understanding and our underlying humanity should motivate our quest for healthy pluralism. But talking only about our common humanity might seem to threaten people’s distinctive identities.

Who am I? We all must pose that question. Answers grow out of basic loyalties to family, faith, community, language, which provide a healthy sense of security and worth. Embracing the values of global citizenship should not mean compromising the bonds of local or national citizenship. The call of pluralism should ask us to integrate diversity, not to depreciate diversity.

The call for cosmopolitanism is not a call to homogenization. It means affirming social solidarity, without imposing social conformity. One’s identity need not be diluted in a pluralistic world, but rather fulfilled, as one bright thread in a cloth of many colours.

My own religious community identifies proudly as Ismaili Muslims, with our specific interpretation of Islamic faith and history. But we also feel a sense of belonging with the whole of the Muslim world, what we call the Ummah.

Within the Ummah, the diversity of identities is immense – based on language, on history, on nationhood, ethnicity and a variety of local affiliations. But, at the same time, I observe a growing sense within the Ummah of a meaningful global bond.

When the question of human identity is seen in this context, then diversity itself can be seen as a gift. In the end of course, we must realize that living with diversity is a challenging process. We are wrong to think it will be easy. The work of pluralism is always a work in progress.

The challenges will be many and continuing. What will they require of us? A short list might include: a vital sense of balance, an abundant capacity for compromise, more than a little sense of patience, an appropriate degree of humility, a good measure of forgiveness, and a genuine welcoming of human difference.

It will never be completed. But no work will be more important.