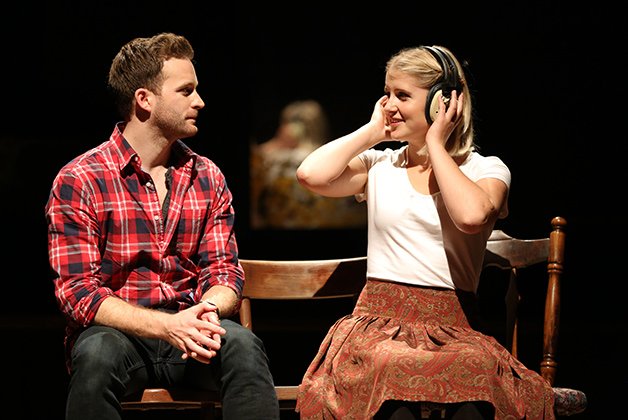 Unconsummated love has powered many sitcoms and the first four-fifths of pretty much every romantic comedy ever made. It’s also a big theme in Once, the Tony Award-winning show about two lonely Dubliners who make beautiful music together yet can’t be a couple.

The unnamed Guy (Stuart Ward) is a disillusioned busking singer/songwriter who’s getting over a bad breakup, mourning his mom’s recent death and working at/living above his dad’s vacuum repair shop. One day Girl (Dani De Waal), a Czech emigre, stops to listen to him, obviously moved by the raw emotion in his music. Turns out she’s got a broken Hoover, plays the piano and writes lyrics. She’s also got lots of sadness in her life.

As in John Carney’s hit 2006 indie film, from which this is cleverly adapted, there’s little plot. The two jam, he introduces her to his Da (Raymond Bokhour), she introduces him to her mother (Donna Garner), daughter (Kolette Tetlow) and Czech friends, and convinces him to record a few songs.

The show is really about mood, emotion and the power of music to touch the soul. The atmosphere begins as soon as you enter the theatre, where you’re invited to join the actors as they play (they’re all musicians) and sing on the stage, which, in Bob Crowley’s set, is a homey old bar.

Enda Walsh’s book and John Tiffany’s direction are simple yet effective, scene changes occurring without a lot of fuss. There’s much beauty in how Natasha Katz’s lighting shifts to create levels of intimacy, especially at the beginning and in a lovely scene in which Guy and Girl look down, at night, on a twinkling cityscape.

Steven Hoggett’s choreography adds another layer to the characters, whose movements are a response to the power of the music.

And the music itself, by Glen Hansard and Marketa Irglova, is drenched with feeling. Songs begin simply and gain depth and complexity as instruments are added. The arrangements are haunting, especially one scene set on a beach in which the characters reprise a song in an a cappella version.

It’s a shame that there’s little chemistry between the two leads. Ward feels recessive, holding back even when he’s rocking out, while De Waal’s Girl is a talented singer, but her accent sounds mannered and put-on.

And even if the central couple isn’t exactly magnetic, the show offers a touching look at an emigre community struggling to find work and love in a new country.

CORRECTION (01/02/2013, 10:39 AM): An earlier version of this article incorrectly identified the actress that plays Reza. We regret the error.