NOW MagazineCultureTheatreOne Thing Leads To Another

One Thing Leads To Another 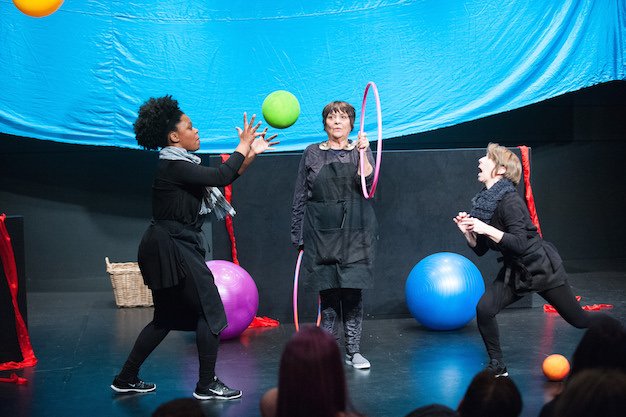 ONE THING LEADS TO ANOTHER by Maja Ardal, Audrey Dwyer, Julia Tribe and Mary Francis Moore (Young Peoples Theatre, 165 Front East). Runs to February 21, see youngpeoplestheatre.ca for schedule. $20 for one adult and infant, $10 for additional adult or toddler. 416-862-2222.

For 50 years, Young Peoples Theatre has been staging works for children and their families.

Now a team led by Maja Ardal (formerly the companys artistic director) experiments with One Thing Leads To Another, a presentation for young very young children, aged three months and up.

Ardal and her collaborators Audrey Dwyer, Julia Tribe (who also had a hand in the design) and director Mary Francis Moore present the piece to its intended audience, a mix of those in arms, crawling or walking.

Babies apparently use all their senses to learn, watching parents and others to absorb how to be in the world. Their neurological systems, suggests the evidence, internally mirror what others are doing. Infants dont so much understand as soak up and imitate what they perceive around themselves.

Ardal (who researched the show for two years) and her fellow artists take this idea and put it to use, beginning with a get-comfortable-in-the-space introduction. The rooms floor is covered with carpet, blankets, cushions and toys the actors first greet the parents, grandparents and infants with hellos, smiles and peek-a-boo games.

The show itself, about 20 minutes long, starts in black and white, with sounds and visual cues passed between actors and audience. Dancing, hand-holding and some simple three-note, wordless melodies are also part of the production, which moves into colour with the appearance of silk flags and ribbons, bubbles, bells, hoops and different sized balls. Pattern and play are key to the staging. A large piece of long blue silk envelops the audience and later becomes water, flowers grow and kitchen implements become a mini orchestra.

As they developed the show, the company didnt know how their very small viewers would react. But the experience becomes immediate for the audience, no matter what their age.

The toddlers are rapt from the start though some chewed on the programs given to their parents and respond both to the watching and the post-presentation section of the afternoon, where everyones invited up to the stage to make contact with props balls and rattlers of different sorts are the favourites at my performance.

Parents and grandparents have as much fun as the little ones here, interacting not only with their own children but also with other parents.

As the title suggests, one action flows into another through showing and sharing, the presentation involving just about every one of the senses. And while the show is aimed at infants up to 24 months, I saw some four- and five-year-olds enjoying themselves.

Any live presentation is different from one performance to the next, but thats even more true with One Thing Leads To Another, where the young viewers are totally unpredictable. This isnt a show to be reviewed so much as described.

By the way, theres a nearby diaper changing station and quiet room, if your child needs some special attention, and also a place to leave strollers.

The most difficult part of One Thing, Ardal tells me, is getting everyone to leave the room when its over. As infants play, they not only learn but also, clearly, enjoy themselves in an afternoon of stimulation and entertainment.