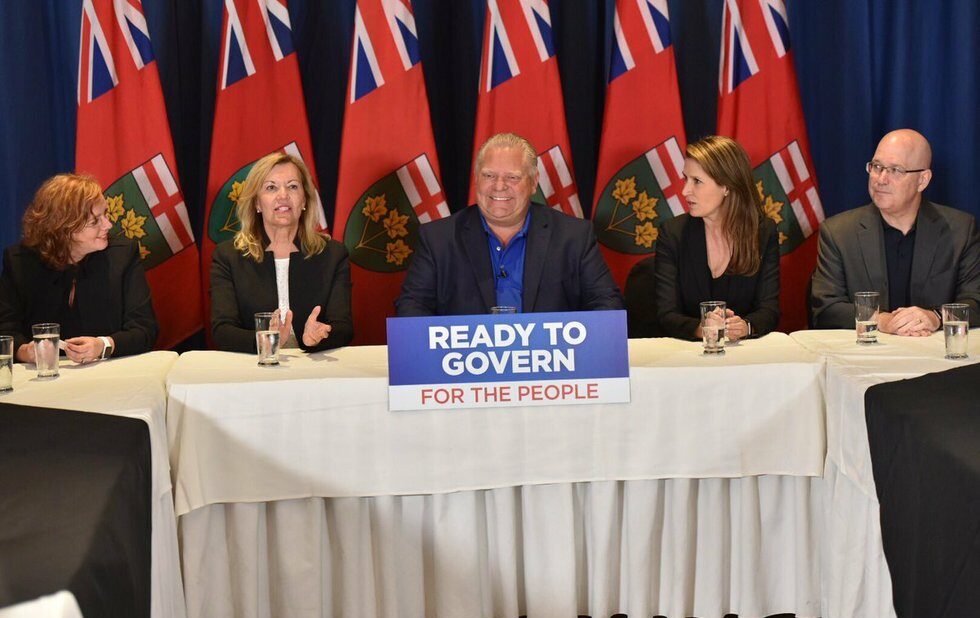 In the final week of the Ontario election campaign, two dozen of us horrified by the prospect of PC leader Doug Ford entering the Premier’s office, gather on the lawn in front of the provincial Legislature. Only, we bring cellphones, not protest signs.

On this sunny Wednesday in May, we are part of more than 125 phone banks organized by Leadnow which have been operating across the province from Ottawa to London, targeting battleground ridings, including Ford’s own backyard in Etobicoke North.

Leadnow, the non-profit dedicated to “people powered change,” sponsored a similar campaign against former Prime Minister Stephen Harper in the 2015 federal election. The objective this time – 50,000 phone calls encouraging anyone willing to talk to us not to vote for Doug Ford. We are just one battalion in an army of volunteers, but surveying the leafy park, we have chosen the best, or at least the most comfortable, venue for this fight.

While others scatter through the park, I choose a bench under the steely gaze of a statue of Queen Victoria, and prepare for the abuse often heaped on telemarketers. The first person I says, “You phoned the wrong person. I’m working on the Ford campaign.”

But over time, the anonymous voices at the other end of the line morph into people as concerned as I am, determined to express their opinion at the ballot box. In my unscientific sample, Ford elicits almost universal fear and anger.

I had come to Queen’s Park feeling that my province was on the verge of electoral doom. But sitting on a park bench, fighting a common enemy with other activists of all ages nestled under trees and curled up beside flower beds (“We shall fight on the beaches, we shall fight on the landing grounds, we shall fight in the fields”) I begin to think, professional prognosticators be damned, maybe we can win this thing.

After two hours, we debrief in the shadow of a statue of George Brown. With few exceptions, my fellow volunteers report massively positive responses. Noting that Leadnow’s campaign had only begun after Doug Ford became party leader in March, phone bank organizer Tim Ellis says, “Initially, we had mixed reactions from the people we reached. But now we’re seeing a shift. More and more people are with us.” Then someone shouts, “Let’s do this again tomorrow!” I’m game too.

The next evening starts out sunny, but then black clouds roll in and an unholy, pelting rain from above washes us out. Victoria Alleyne and I, the only ones to disbelieve the pessimistic weather forecast, debrief under umbrellas en route to the College subway station. We squeezed in quite a few calls. One man tells Victoria he would never support the Liberals because of their restrictive approach to selling marijuana. “Only Kathleen Kathleen Wynne could lose money selling drugs,” he says. So he was going with Ford.

Victoria and I agree it is supremely logical for this voter to choose the only party leader reputed to have the most expertise selling illegal drugs. Sometimes, you just gotta laugh.

Unlike shy souls like me, Victoria has a real talent for making a meaningful connection with strangers on the phone. “Actually,” she says, “I hate talking on the phone. But this election is so important I’m pushing past the discomfort.” Food for thought for anyone who thinks walking to a polling station is too much trouble.