Involvement of provincial force is a sign the probe is "getting closer and closer to the mayor's office," says councillor 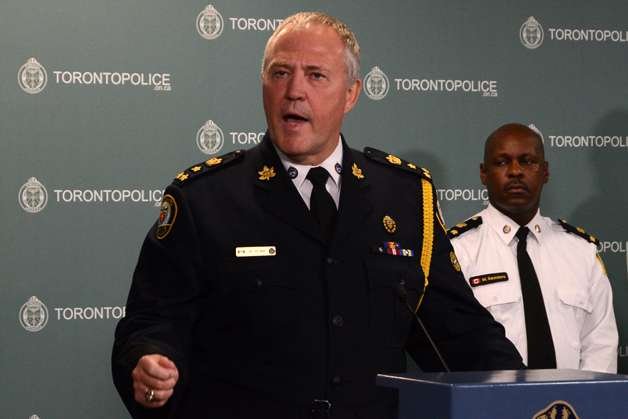 In a possible sign that the criminal investigation into Rob Ford is intensifying, Toronto’s police chief has asked the provincial police to oversee the case.

In a letter to Lewis on Wednesday, Chief Bill Blair said he was requesting the OPP take over “to avoid the distractions that have assumed such recent prominence.”

“The only public interest here is the continued investigation, without fear or favour, into evidence of possible criminality,” the letter said.

TPS officers, including lead investigator Det.-Sgt. Gary Giroux, will remain on the case but will now report to an OPP detective inspector who will in turn report to the provincial force’s chain of command. Any decision on possible charges would be made by Giroux, the OPP, and the crown. Blair would not be involved.

The new arrangement comes in the wake of a nasty public spat between Blair and Toronto’s embattled mayor. The feud began last fall when Blair confirmed the existence of the video that appears to show Ford smoking crack. During a bombshell October 31 press conference, the chief said he was “disappointed” after watching the footage.

Since then both Rob Ford and his brother, Councillor Doug Ford, have accused the chief of targeting the mayor as part of a political vendetta. They have claimed that he launched Brazen 2 as retaliation for the mayor’s attempts to cut the force’s budget, and suggested that the chief is in cahoots with John Tory, who is running against Ford in the October 27 mayoral election.

Councillor Ford recently filed a complaint against Blair with the Office of the Independent Police Review Director over his comments about the video.

On Wednesday, Councillor Ford said he welcomed the news that the OPP would now oversee the case.

“I look forward to them doing the work there,” he said. “I’m happy. It won’t be so political maybe.”

The mayor said the decision had come too late, however.

“The damage has already been done. The chief obviously is just playing political games, and it should have been done from the very beginning,” he told reporters when he arrived at his office shortly before 3 p.m.

Asked if he is worried that he may soon face charges, Ford suggested he had done nothing wrong.

“Charged for what? An empty vodka bottle? Or urinating in the park?” he scoffed, referring the findings of a raft of court papers that documented his questionable activities away from City Hall but did not lead to any charges.

The mayor said he wanted to know how much the police had spent surveilling him, calling it “a waste of taxpayers’ money.”

According to Toronto police spokesperson Mark Pugash, bringing the OPP on board earlier would have risked delaying the investigation. Provincial investigators wouldn’t be familiar with the background of the case, he argued, which stemmed from a year-long drug and gang probe called Project Traveller.

Pugash said Blair finally decided to request help from the OPP because of a recent increase in “personal attacks” against him, and the chief felt it was important to ensure the integrity of the case should it go to court.

Pugash would not say whether charges against the mayor were imminent, saying that he couldn’t talk about ongoing investigations.

As for the mayor’s assertion that the “damage has been already been done,” Pugash responded: “That’s probably an argument that he or his lawyers will make and it’s not for me to comment on.”

Councillor Adam Vaughan speculated that the OPP’s involvement signals that investigators are “getting closer and closer to the mayor’s office.”

“It just underscores how serious these allegations are,” said Vaughan, a former member of the police board. “Having the OPP come in I guess just helps us make sure that we have confidence that the police work is police work, and hopefully we’ll get some answers.”

Brazen 2 has already resulted in charges against Ford’s friend Alexander “Sandro” Lisi, who is accused of several drug offences as well as extortion in connection to his alleged attempts to retrieve the crack video from men who tried to sell it to the press.

It’s believed the police are trying to determine whether Lisi acted on his own in the alleged extortion attempts, or whether he had direction from someone else.