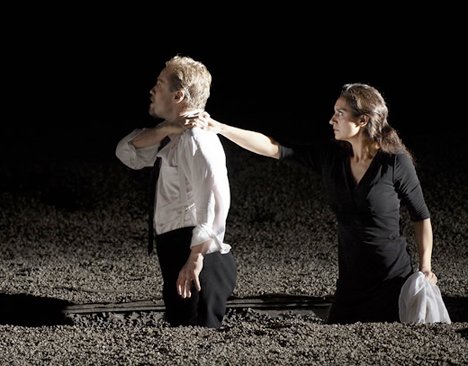 The 1762 opera (in its original version) is itself a model of economy, featuring only three principals (plus a chorus) to play out the myth of the grieving eponymous lover (Lawrence Zazzo) who’s given the opportunity by Amore (Ambur Braid) to travel to the underworld to rescue his beloved (Isabel Bayrakdarian), on condition that he not look back at her on the way up.

Orfeo was Gluck’s emotionally direct response to the excessive ornamentation and vocal fireworks popular in operas at the time, and Carsen and his team respect the work with a simple but by no means stark design. Tobias Hoheisel’s sets and costumes evoke everything from a rubble-strewn burial ground visited by mourners clad in modern black dress (in act one) to a spooky Hades full of shrouded corpse-like Furies (in act two).

Carsen and Peter Van Praet’s lighting shifts subtly and through various means, signalling at once a sombre twilight or a dreamlike world of shadow and uncertainty. Look for two scenes that make simple but effective use of a circular motif.

The performances are superb. Braid’s Amore is characterful and spontaneous in voice and presence, while sweet-toned Bayrakdarian elicits pity in Euridice’s pleas to her seemingly cold-hearted husband. But it’s countertenor Zazzo who wrenches your heart with his powerful, plangent voice, especially in the aria following Euridice’s second death, proof that Gluck was a consummate man of the theatre.

Under Harry Bicket’s baton, the COC orchestra makes the 250-year-old music sound full and alive, while the superb chorus fills the hall with such pure emotion they could literally move heaven and hell.