NOW MagazineNewsOut on a limb: the trouble with the trees

Out on a limb: the trouble with the trees

December's ice storm, which snapped tens of thousands of treetops, showed how vulnerable our green roof is to the whims of extreme weather. 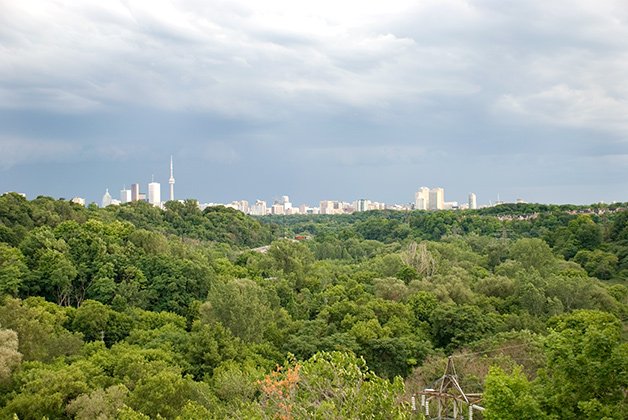 December’s ice storm, which snapped tens of thousands of treetops, showed how vulnerable our green roof is to the whims of extreme weather.

10.2 million Estimated number of trees in our canopy.

$7 billion Estimated value of the environmental and health benefits bestowed by Toronto’s trees.

$28.2 million Annual value of our canopy based on air pollution removal and energy savings. Yes, money does grow on trees.

7% How much higher rents are in commercial areas with trees.

40% Target coverage by 2050 – but we’re behind schedule because of cuts to the tree-planting budget.

60% How much of the canopy is on private property and therefore more vulnerable to development and intensification.

The biodiversity gap and more room to grow

68% How much of the canopy consists of trees less than 15 centimetres in diameter. The immaturity of our trees makes them more sensitive to environmental hazards.

Since 2000 The city has embarked on a proactive maintenance and watering program but only in selected areas.

Alien invasion and the return of the Asian Long-horned Beetle

860,000 Ash trees we’ll lose to the Emerald Ash Borer by the end of the decade. That’s almost 10 per cent of the canopy.

28,000 Number of trees claimed by the Asian long-horned beetle after a decade-long battle with the bugs. And they’re back with a vengeance.

42% How many of Toronto’s street trees are infested by the ALHB.

European gypsy moths have been attacking oaks in our parks and neighbourhoods for 20 years, but in numbers small enough to control with manual spraying. Not any more – Toronto needs helicopters to carry out extensive aerial spraying.