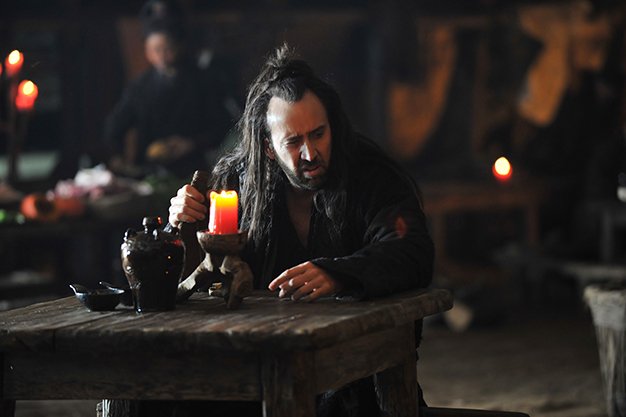 Nicolas Cage clearly got his hair done at the Battlefield Earth salon.

For an action movie, Outcast is really boring.

And not just during the dialogue scenes, which are pretty dull even with Nicolas Cage and Hayden Christensen yelling at each other in ridiculous accents as disillusioned Crusaders who find themselves in the middle of a Chinese succession crisis. There are long stretches of actual action, too, and they’re just dull as dirt.

Right, the plot. It’s the 12th century, and three years after massacring a lot of brown people, Christensen’s world-weary, disillusioned Jacob winds up protecting the teenage heir to the Chinese throne (Bill Su Jiahang) and his sister (Yifei Liu) from their usurper brother (Andy On), who’s sent legions of warriors after them to solidify his power.

After a lot of running and fighting, they find an ally in Cage’s Gallain, who’s even more disillusioned and world-weary than Jacob, though much more shouty. And then there’s more fighting, none of it interesting.

Those looking for an engaging action movie will be disappointed, and those hoping for a juicy Cage performance will be even more disappointed. He’s doing the same surly, self-serious thing he did in his last ex-Crusader project, Season Of The Witch.

Outcast isn’t even the kind of bad that’s fun to write about. I think you can tell.