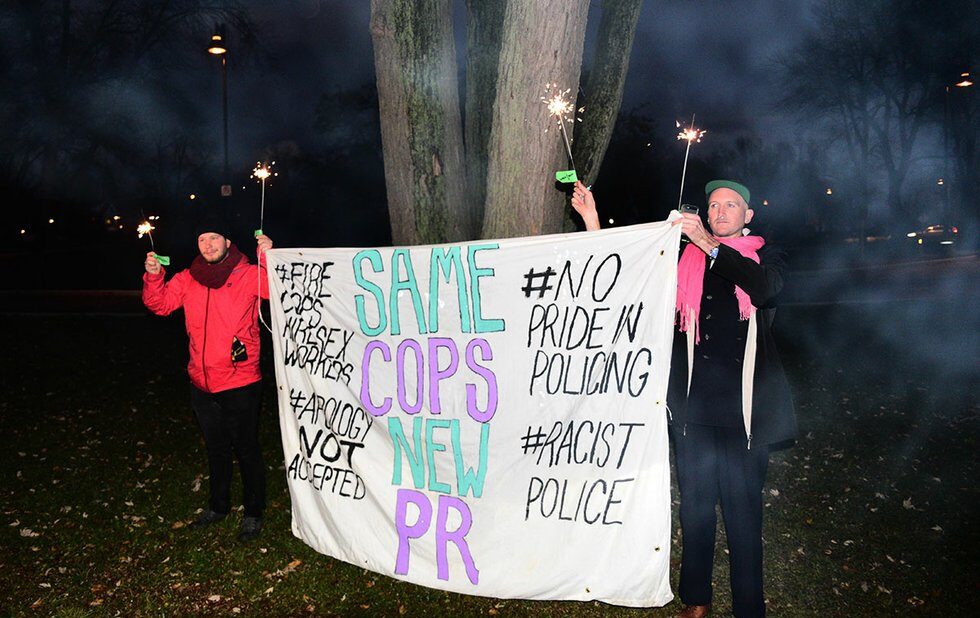 On what felt like the coldest day in months, dozens of locals showed up at Marie Curtis Park in Etobicoke on Saturday, November 19, for the latest Walk The Beat event organized by Toronto police from 22 Division.

Dubbed Take Back The Park, the five-hour event was organized with the help of area residents and described on the website of Mississauga councillor Jim Tovey, whose ward borders the popular green space, as an opportunity for residents “to discuss the issues plaguing Marie Curtis Park.” Namely, the alleged sex crimes going on in the park and the police sting known as Project Marie set up six weeks ago in response.

The affair featured free hot dogs and hot chocolate, a picnic, park cleanup and “fun activities for the kids.” The highlight: a candlelight walk through the areas where police say men have been engaging in public sexual activity.

It was all part of a wider police initiative, according to Tovey, to “foster community support and involvement.” But dozens of members from Toronto’s LGBTQ community and their supporters – including lawyer Marcus McCann, who is offering free legal counsel to anyone charged – turned out as well to confront the police and the community over Project Marie, which McCann described as “a shameful moment in police/LGBTQ relations.”

Police say Project Marie has so far resulted in a total of 89 citations, most of them bylaw infractions, including 71 for indecent exposure and engaging in sexual activity, against 76 men and two women. But so far only one criminal charge has been laid, and this has prompted charges of police harassment – and comparisons to the 1980s bathhouse raids – from Toronto Councillor Kristyn Wong-Tam and Parkdale MPP Cheri DiNovo, both of whom have called for the dropping of the police investigation.

Etobicoke Councillor Mark Grimes, who attended the event, told NOW he wished Wong-Tam would have talked to him before criticizing the police operation. “This is my ward, and I don’t think she’s hearing from my residents and my families.”

In an open letter urging Ontario Attorney General Yasir Naqvi to intervene “before more lives are ruined,” DiNovo, the NDP’s critic on LGBTQ issues, says that the police operation has included undercover officers “trying to lure gay men and trans people to proposition them for sex.”

Police say they are not trying to label the men who’ve been charged as sex offenders. But that’s become the overriding narrative for community members after police invited a reporter from the Etobicoke Guardian, a local community newspaper owned by the Star, on a recent patrol around the park.

The story, published by the paper on November 10 and later republished in the Star, reported that a registered sex offender was among those charged by police – for breach of conditions after allegedly exposing himself “in the vicinity of children.” That turned out to be the lone criminal charge laid by police, but it was enough to spark panic.

Constable Kevin Ward, one of the plainclothes officers who worked on Project Marie and the de facto spokesperson for police at Saturday’s event, came prepared for protesters’ questions. He explained that Project Marie had three phases.

The first, which consisted of uniformed officers patrolling the area and telling everyone they saw that there was an increased presence due to complaints they were receiving, he called the “education phase.”

According to Ward, that only pushed alleged offenders further into the bush to better conceal their alleged activities.

After that came the controversial “enforcement” phase, when plainclothes officers conducted what critics are now calling a “sting.” Ward said this was the most effective phase because in the roughly two weeks since it concluded, police have observed “next to nobody in the park for illegitimate behaviour.”

He said police took a “measured approach,” charging people only for ticketable bylaw offences like trespassing or lewd behaviour. They did this, Ward said, to mitigate the consequences for people who might not have the financial wherewithal to deal with more serious charges. “It’s not as bad as being pulled over and given a speeding ticket,” he said.

Saturday’s event was the beginning of the third phase, which calls for the active participation of community members to utilize the park as a way to discourage illegal activity.

Ward appealed to the crowd of about 50 to “walk the trails, spend time with your families, deter this behaviour – because the more legitimate users we have in the park, the less room there is for the illegitimate ones.”

Aside from a few raised voices and some chanting by protesters, people from the community and the protesters spent most of the day chatting with each other amicably.

Toronto-based human rights lawyer Lisa Amin, who was among the protesters, commended the residents for coming and engaging with them. “They had a lot positive things to say as well.”

Amin says the crux of the protest wasn’t to suggest that those who were charged should be allowed free rein in the park, but to highlight the police response: plainclothes officers approaching and/or allowing men to approach them to talk about sex.

“I don’t think we have an enormous number of people who are 100 per cent adamant that this type of behaviour should be allowed to go on, you know, undisturbed,” Amin said, noting that police operations of this nature have been known to be followed by suicides.

“There are many ways that we can minimize what people are considering nuisance behaviour without criminal charges. It still is a major stigma and oppression visited on very marginalized men, closeted men, men who have sex with men.”

The police focus, McCann said, should have been on harm reduction, like education or adding signage in the park, rather than punishment. According to protesters, TPS did not consult their LGBTQ liaison before conducting the operation.

She hopes the members of the community they spoke with can see their point of view – that Saturday’s event wasn’t just about litter and the park, but high-handed police work carried out with little regard for the people affected.

Jake Yoo, one of the event’s organizers, who lives near the park, said there’s a misperception of Project Marie as homophobic.

“Personally, I’d welcome members of all parts of the community – including LGBTQ – to be a part of coming up with a solution.”

Another resident, Katherine, who wished to be identified by her first name only, said protesters need to understand the community’s concerns, too. “I don’t care what your sexual orientation is if you’re having sex in a public place, it’s inappropriate.”

It seems the operation will go on despite the criticism. Police say Project Marie has been extended to next spring.