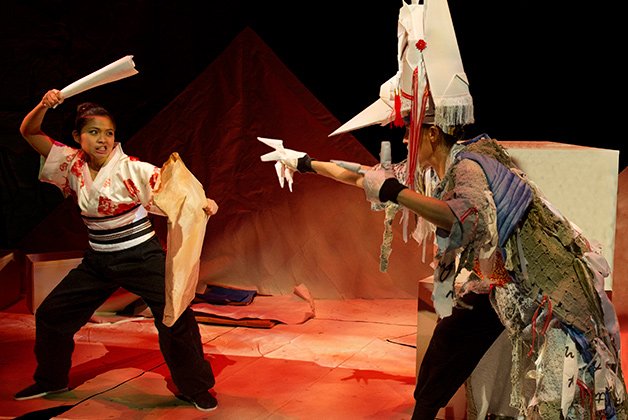 Paper Song, aimed at children five and up, makes terrific use of origami in its blend of the traditional Japanese tale of a magical crane and playwright Jared Matsunaga-Turnbull’s added narrative of a mouse community who, with the help of the crane, fight off a goblin bent on subjugating their town.

In the original folktale, a poor man nurses a wounded crane back to health and, soon after, he weds a mysterious woman who appears on his doorstep. She weaves clothing from silk to help them live, with the understanding that the husband never ask how she does it. Increasingly greedy, he asks for more and more silk and discovers that his wife is in fact the crane, weaving silk from her own feathers. When he confronts her, she disappears.

Matsunaga-Turnbull’s extended story brings the crane as a saviour into the mouse tale, but here the narrative, despite some moments of exciting staging, isn’t as clearly focused.

Presented by Edmonton’s Concrete Theatre as the season finale at Young People’s Theatre, the production could stand to be shorter by about 10 minutes, not only tightening the narrative but also keeping the interest of the audience, which grew restless – kids tell you immediately when something’s not working – several times during the hour-long show.

The three actors – Sean Baek, Ntara Curry and Zina Lee – play a number of roles, singing as well as acting. Lee’s singing could be stronger, since as Utako-Chan, the young mouse whose name means Little Song, her voice is a key part of the plot. Tengu, the goblin, is a welcome character both Baek and Curry wear his robe and fantastical white headdress-mask, and the audience always watches attentively when he’s onstage. Baek offers the widest acting range, sharply defining Tengu, mouse grandfather Giichan and a firefly named Hotaru.

Also of note is Cory Sincennes’s production design, which includes large- and small-scale origami some of the characters are paper figures and others are shadow-puppets. Kim Clegg’s projection and animation design is also a plus, especially in the story’s climax, which becomes a creation myth about the moon and the stars.