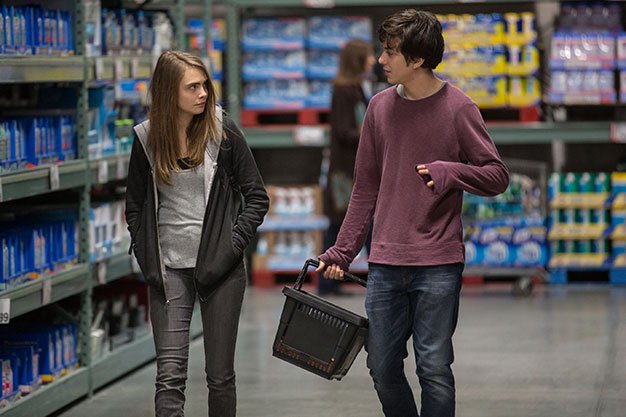 Paper Towns is a modest, low-key adaptation of John Green’s young adult novel about love and obsession during the final weeks of high school in an upper-middle-class Orlando suburb.

The nerdy Quentin (Nat Wolff) has always had a crush on his cooler-than-cool neighbour and high school alpha female Margo (Cara Delevingne). When Margo elicits his help one exciting night to wreak vengeance on her enemies, Quentin thinks things between them have changed. Then Margo vanishes, leaving only a few obscure clues about her whereabouts.

Scott Neustadter, who did a fine job adapting other YA titles like The Spectacular Now and Green’s own The Fault In Our Stars, tightens up some of the book’s saggy middle section and finds the heart of the material in the friendship between Quentin and his geeky pals Ben and Radar, played with authenticity by Austin Abrams and Justice Smith.

Neustadter and director Jake Schreier get great use out of a road trip section, letting the teens’ relationships (Halston Sage and Jaz Sinclair are also along for the ride) develop naturally.

Delevingne, a former model, is a perfect Margo, idealized but full of mystery and undeniable charisma. Wolff, who had a nice supporting role in The Fault In Our Stars, underplays things for much of the picture, which makes his emotional outbursts in the final reel that much more moving.

Scheier doesn’t do anything flashy, capturing the very un-Disneyfied Orlando without irony or judgment. Even the indie music soundtrack is understated.

There’s no SeaWorld sequence, but there is a cute Ansel Elgort cameo.