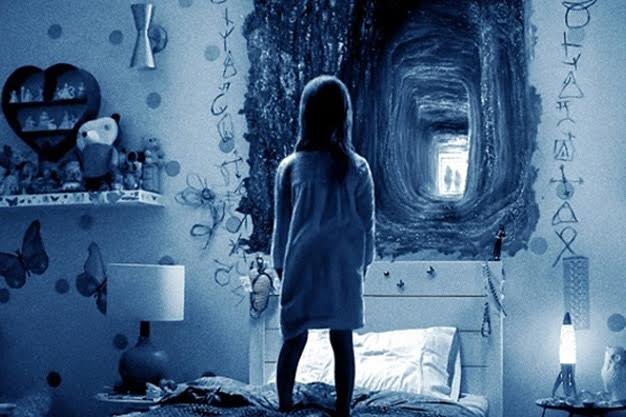 After the side trip of The Marked Ones earlier this year, the Paranormal Activity franchise gets back to the tried-and-true formula of a young family besieged by creepy noises in their great big house.

In fact, within minutes of the start of Paranormal Activity: The Ghost Dimension, it’s clear that this chapter of the story is unfolding in an especially familiar house – the one where some very nasty things happened in the third movie, which cemented the increasingly elaborate mythology that director Gregory Plotkin and his team of screenwriters continue to expand here.

The basic concept is pretty simple. A demon cult has spent decades trying to raise a supernatural force, apparently using young girls as mediums. They’ve conjured up a spirit that manifests itself to the girls as a friend named Tobi, and now they’re on to the final phase of their plan, whatever that is.

Every movie depends on a new set of protagonists discovering exactly how badly things are about to go for them. But since the nature of found-footage movies means pretty much nothing can happen until the end – otherwise people would put down the camera and run away – the Paranormal Activity movies are largely about stalling for time. Characters are forever wandering into dark rooms to be startled by an unearthly thump or the appearance of an unexpected face.

This means the movies have to find new ways to keep us interested. Paranormal Activity 3 strapped a camera to an oscillating fan, adding pans to the locked-down surveillance footage that is the franchise’s trademark, and in Paranormal Activity 4 the filmmakers added footage from characters’ webcams and iPhones – though, as always, the question of who’s editing the recordings into a single program (and using the same onscreen supers to tell us where and when the footage was recorded) remains unanswered.

The Ghost Dimension adds 3-D, via the discovery of a video camera from 1988 that’s been tricked out to see whatever it is that humans can’t. Mostly, that’s slivers and clouds of black ectoplasm, which will probably be very difficult to notice in the already gloomy frame. But sometimes we get a glimpse of Tobi’s spectral form, which means characters now get to walk into dark rooms and wait to be attacked by CGI effects that also swoop out at the audience.

If you still enjoy these movies, you’ll probably enjoy this one, too. Chris J. Murray and Brit Shaw are convincing as young parents whose daughter Leila (Ivy George) is Tobi’s newest friend Dan Gill is especially lively as Murray’s skeptical brother, while Olivia Taylor Dudley makes many concerned faces as a family friend. They occasionally say clever things in the first half of the movie, but – as is always, always the case – any character development is boiled away for screaming and running once the final set piece starts up.

As a regular viewer of the franchise, I was especially happy to see the refrigerator-door gag make an appearance this time around, and once again not pay off. Gotta hold something back for the seventh one.