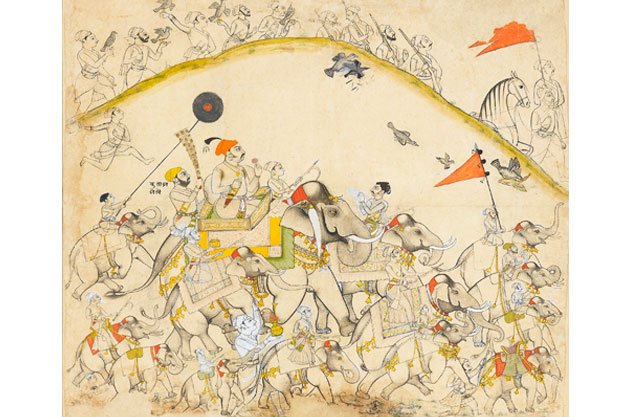 Maharaja Raj Singh And His Elephants is in Howard Hodgkin's collection at Aga Khan.

Maharaja Raj Singh And His Elephants is in Howard Hodgkin's collection at Aga Khan.

Suffering from a Eurocentric education? There’s a remedy: visit the Aga Khan Museum and get a primer on the breadth and depth of Middle Eastern and Asian culture.

This two-part show devotes one room to works by Turner Prize-winning contemporary British artist Howard Hodgkin, who lives part-time in India. His semi-abstract paintings on handmade paper or framed wooden panels feature bold swaths and dabs of hot colours that echo the palette of the Subcontinent.

They serve as a bridge to the treasures beyond: beautiful Mughal paintings and drawings from Hodgkin’s collection dating from the 17th to early 19th century. He’s chosen these elegant works with an artist’s appreciation for line, colour and composition.

Larger paintings on cotton would have hung on walls. Others may have been part of albums or served as preparatory studies. Many were made at smaller courts away from the Mughal imperial centre in Delhi, where Hodgkin believes artists had more freedom to experiment.

The Mughal rulers, Muslims who came from Central Asia, brought the style of Persian miniatures to India, where it was adapted to local tastes. Artists achieved a high degree of realism within the Indian conventions of figuration, in which faces were depicted in profile with large, curvaceous eyes and swirling moustaches. Both portraits and crowd scenes testify to their sensitivity and skill.

Especially exquisite are paintings and drawings of elephants, the Indian equivalent of European equestrian art. Lovingly portrayed, the powerful yet graceful creatures bear maharajas in processions and soldiers into battle or stand for portraits adorned in finery.

The culture’s high sophistication is evident in the synesthetic Ragmalas, leisure scenes that illustrate the spirit of Indian music, while paintings of dancing Gopis from a Hindu temple testify to the religious tolerance that prevailed under the Mughals.

Artworks of this calibre speak eloquently, so forget at about the gaps in your Eurocentric education and do as Hodgkin asks – just see.