Liam Neeson and Paul Haggis on sex and the aging man

To mark the DVD and Blu-ray release of Third Person, the director and actor reminisce about impossible women and Rome 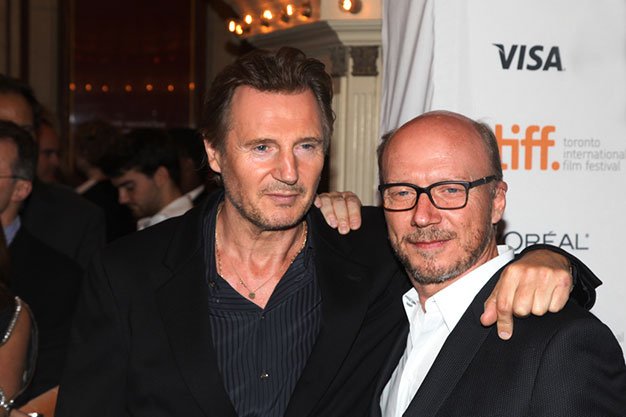 When I shake Liam Neeson’s hand, I’m convinced he could snap my neck. The towering Irish actor has the kind of grip that you imagine could strangle a boa constrictor, making his retirement-age rebirth into an action hero much easier to comprehend.

The guy who once portrayed Oskar Schindler is shocked that he’s now being asked to pistol whip baddies in movies like Unknown, Non-Stop and the upcoming Taken 3, another sequel in the franchise that got this whole ball rolling.

“I would have laid money that Taken would go straight to video,” Neeson says, emphasizing that he only tackled the role because he wanted to explore the “sporty boy” in him.

“Fox sold it incredibly well, and they’ve been sending me a lot of action scripts ever since. How do you make God laugh? Tell him your plans.

“It’s lovely to be back in the saddle, as it were,” Neeson adds about his return to manhandling. “But it’s equally lovely that Paul Haggis gets in touch with me and sends me a script where there’s not one punch thrown.”

He’s referring to Third Person, a mosaic on the mysteries of love that Neeson and writer/director Haggis (of Crash fame) unveiled at TIFF in 2013. The morning after the premiere, we’re sitting in a Fairmont conference room that’s way too large for just the three of us. Neeson is so relaxed he’s on the verge of a snooze, wearing jeans and a Reebok jersey, leaning back in his chair while speaking in gruff whispers.

Haggis, on the other hand, is jumpy and excitable in his black-on-black blazer/T-shirt ensemble. At one point he leaps up to snap photos of us on his smartphone, feigning excitement at Neeson’s presence despite having spent months filming with the actor.

“Talk amongst yourselves. I’m going to take a picture of you,” says the director in a tone that’s as disingenuous as many of his movies.

The two first worked together on a single-day shoot for Neeson’s glorified cameo as an expert escape artist in Haggis’s jailbreak thriller The Next Three Days. In Third Person, Neeson plays an aged author trying to write a novel in Rome while carrying on an emotionally complicated sexual dalliance with a much younger woman (Olivia Wilde).

“Going over to Rome, getting into bed with Olivia Wilde and working with Paul Haggis – it’s a no-brainer,” says Neeson about why the ambitious project appealed to him. Though, at 61, he did have some reservations about dropping his duds for the role.

“I was concerned just because I am an actor and I have an ego. The bare image is going to be up there onscreen, revealing that I haven’t been doing as many push-ups as I should have been. I excuse myself by thinking, ‘I look real.’ I didn’t want to look all buff and false.”

Neeson’s character is one of three men in Haggis’s triptych who grapple with the challenges of love, yet another grand theme the director tackles in the same way he dealt with racism in Crash.

“I wrote the film because I had questions, not because I had answers,” says Haggis, explaining that he borrowed from his own experiences, fictionalizing them in the same way he did with his 2005 Oscar winner.

“I put these simple questions in each of these characters’ lives: How do you deal with impossible women? Do you trust them? Do you damn them? Do you try and change them?”

When I point out that the male characters in his film (instead of the women) strike me as impossible, Haggis clarifies: “Oh, there’s impossible men, too. But we don’t care about that because we’re men. I have no idea how women could put up with any of these characters.”

Neither Haggis nor Neeson claims to be an authority on relationships. Haggis admits to becoming more confused by love as time goes on. Neeson concurs, recalling his own dilemmas about meeting people.

“I think the older you get, in spite of yourself, you want to close doors,” Neeson admits. “When I meet a new lady and all the potential is there, I find myself going, ‘Well, that’s not going to work,’ because 10 years ago this happened. So you suddenly close this door and close that door and then you wonder why [women] are not interested in you any more. You say to yourself, ‘I fucked that up again.’”

Third Person doesn’t provide relationship wisdom despite its efforts to deal with love from a plethora of angles. Even audiences who found the pandering, grandstanding social politics in Crash profound weren’t too keen on Third Person, which was burned by critics and spurned by audiences. Its theatrical release in Toronto was cancelled.