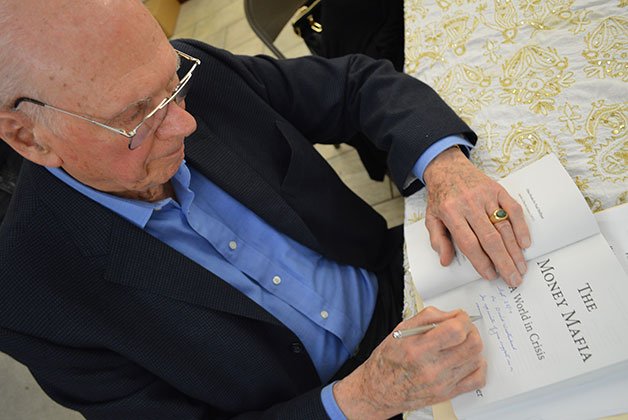 In the basement of Metropolitan United Church at the corner of Queen and Church, sandwiches and coffee are being served on Thursday, September 25 as a crowd of about 100, a mix of parishioners and conspiracy buffs, are lined up at a long table at the end of which Paul Hellyer is signing copies of his thirteenth book, The Money Mafia – A World in Crisis.

Poster-sized black and whites of Hellyer in the prime of his political life are mounted at the front of the room. Here he is with Trudeau and there with a broadly-grinning Jimmy Carter. Next to the podium is a circa-1949 shot of a fresh-faced Hellyer beaming and waving from atop the shoulders of supporters when the constituents of Davenport first sent him to Ottawa as a Liberal. He was the youngest Canadian MP at the time.

There are light years between the photos and Helleyer’s notoriety today in the ET disclosure community and his belief in the existence of extraterrestrials. At a University of Toronto conference in 2005 he declared, “UFOs are as real as the airplanes that fly over your head.”

After patiently inscribing all the copies in the room, the 91-year-old, who was Pearson’s defence minister, and deputy PM and transport minister under Trudeau, uncoils his lanky frame and takes to the podium.

In Mafia, Hellyer describes a world in which unelected governments operate secretly inside official governments all in service of the military-industrial complex. From hoarding “free energy” secrets gleaned from flying saucers that could help save us from global warming to international trade agreements, the cabal includes the energy and oil sectors.

“It all began with the Roswell crashes,” says Hellyer. He is referring to the famous incident near Roswell, New Mexico in 1947 when the Roswell Air Field commander reported in a press release that the base had “come into possession of a [crashed] flying saucer.” The next day military officials said they were mistaken, what they found was a weather balloon.

“Ever since then, it’s been denial,” says Hellyer. “And they have absolutely kept from all of us the back engineering that’s been done over the last 60 years.”

The solution he offers in the book is to insist on government disclosure and access to these “exotic technologies.” He describes his seven-year plan to “Install clean new energy into every car, truck, ship and plane and house in the world.”

The venerable money reformer is on a mission to save the world from globalization and government secrecy. His voice rattles with genuine concern.

After resigning from Trudeau’s cabinet in 1968 over housing policy, Hellyer became a political wanderer, running unsuccessfully against his former boss in ’68 for the Liberal leadership, sitting as an independent, and later crossing the aisle to the PCs. In 1997 he started the Canadian Action Party to push for the kind of monetary reform Hellyer promotes in Money Mafia: interest free loans to government for public projects. He says the current money system “is designed to take us to the cleaners.”

Today, Hellyer warns of a hyper-Orwellian New World Order run by banker elites and their masters of war with designs on our personal freedoms. “They don’t want any change,” says Hellyer. He’s been dishing classic conspiracy fare all night, but it’s hard to look away. The packed room of white-haired fans and 30-somethings nod in unison.

He ends with a plea to urge the Harper government and legislators everywhere not to let current free trade agreements go forward. “That is high treason,” he fumes. Standing ovation.