Fighting the Negaverse and winning hearts by moonlight 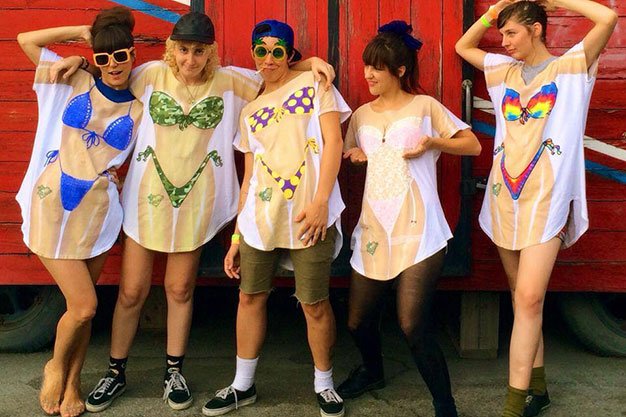 It’s takes a rare kind of performer to play a punk-tinged version of the Sailor Moon theme song and it not come across as shtick or irony. But that’s the power of Peach Kelli Pop – aka Allie Hanlon and her band of kickass girl pals – who won over my inner pre-teen the moment the words “fighting evil by moonlight / winning love by daylight” came tumbling out. (Or maybe she won me over when she jokingly commented on how she knows she’s made it judging by all the hot babes at the show.)

Hailing from Ottawa but now introducing herself as an Angeleno – albeit with a bit of hesitation – Hanlon writes short and sweet pop songs, and the set followed suit. She burned through 30 minutes of her catchiest tunes, rife with doo-wops, swooning gang vocals and chugging guitars, from her new album out next week on Burger Records and earlier fan favourites. Peach Kelli Pop are a touring machine, and it shows. The five-piece were incredibly tight (despite Hanlon’s vocals getting buried at some points) and had enough stage presence to match the high-energy songs.

It would be easy to peg her as merely a reaction to our current obsession with the 90s and the always on-trend retro surf-rock. But even if all of that fell to the wayside tomorrow, Hanlon would keep on writing vigorous, sugary songs about Dream Phones and egg rolls. Three LPs in and only gaining steam, she continues to fight the Negaverse, winning hearts by moonlight.