When the Toronto Police Service moved its internal radio communications to an encrypted channel last year, it meant that the. 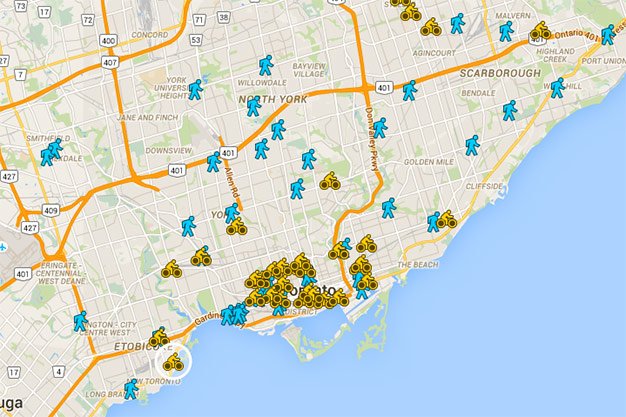 When the Toronto Police Service moved its internal radio communications to an encrypted channel last year, it meant that the city’s newsrooms could no longer listen in to an unfiltered stream of unfolding incidents. But the force’s shift to offering live updates through Twitter while not a substitute has presented its own opportunities.

StruckTOBot, for example, is a Twitter bot that tracks the @TPSOperations feed and retweets reports of collisions involving pedestrians or cyclists. A real-time chronicle of unfortunate events, each new RT from StruckTOBot e.g., “COLLISION: Pharmacy Ave and Danforth Ave, report of a pedestrian struck, bleeding from the head” lands with a visceral thud.

While collision data has never been secret, it’s also never been so readily available. It’s one thing to map bike collisions over years, picking out patterns and trends it’s another to have a snapshot of the current state of the streets laid out before you, current to the minute.

So we’ve taken it upon ourselves to map every incident StruckTOBot picked up on from May 1-31. We’ve included the text of the original tweets or, where available, the press releases that were issued in the handful of most serious cases:

These are, of course, just those incidents to which the TPS responded and tweeted about in a way that StruckTOBot could find them. So even crashes like this from yesterday morning get overlooked:

Waiting to turn left, hit head on by car crossing into my lane in rush to turn left. Jumped out of way leaving my bike to be smashed #biketo

Still May: car attack has damaged my bike and my greatest daily pleasure, commuting 22+ km. She said my bike’s black, so hard to see #biketo

The sample is likely too small to draw many meaningful conclusions about specifics. But it’s interesting to note that of the 33 cyclist-involved collisions this month, 10 occurred along major corridors that City staff want to look at as possible sites for future bike lanes or cycle tracks Yonge, Bloor, Danforth, Midland, and Lake Shore Boulevard West (between Mississauga and the Humber River).

But when the staff report on the Ten-Year Cycling Network Plan went to the Works Committee on May 16, councillors gutted the report, removing all Major Corridor Studies except for the ones on Bloor and Yonge that were already under way. The full City Council will have the final say next week, but it’ll be an uphill ride for cycling advocates because Mayor John Tory supports this go-slow approach to building out bike infrastructure.

These five collisions represent parts of the staff-recommended bike plan that the mayor wants to delete for the time being:

COLLISION
Danforth Ave and Warden Ave, report of a cyclist struck, no info on injuries ^cb

COLLISION
Lakeshore Blvd and Allen Ave, report of a cyclist struck, no info on injuries ^cb

Happy to proclaim Bike Month in the City of Toronto. pic.twitter.com/UKk9Cthlrr

Don’t miss: Here’s what you should do after a bicycle accident.