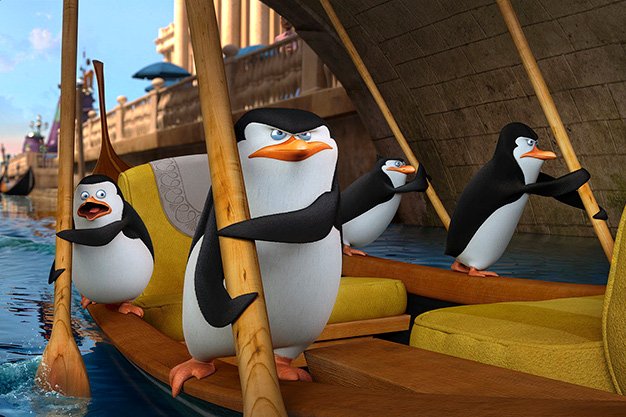 These Penguins won't float your boat.

Few movies are played on repeat in my house as much as the last Madagascar, Europe’s Most Wanted, an antic and infectious series peak. The kids can’t get enough of the neon colours, absurdist wit and singing along to Chris Rock’s Afro Circus. That tune along with the humour and Red Bull energy only make brief cameos in Penguins Of Madagascar, a deflated return to the franchise’s blah beginnings.

The spinoff focuses on the super-smart and self-serving penguins, probably because the other zoo animals, voiced by Rock and Ben Stiller among others, wanted to leave on a high note. So it’s up to Skipper (Tom McGrath), Kowalski (Chris Miller), Rico (Conrad Vernon) and the cuddly Private (Christopher Knights) to step up from scene-stealers to characters with an arc. They become derivative in the process.

While doing battle with a vengeful Octopus (John Malkovich), the mischievous penguins compete with an elite covert animal team headed by a wolf (Benedict Cumberbatch, who makes the most of not much). That plot keeps us busy but not necessarily entertained, since the action and the gags are all well worn, save for a hilarious Werner Herzog cameo in the prologue.