Performance chops set The Lemon Twigs apart from all the rest 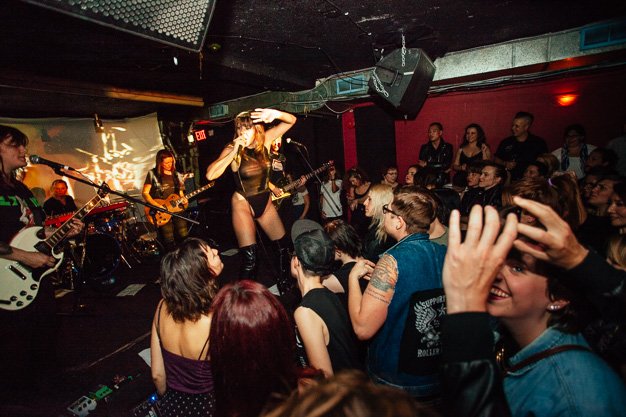 THE LEMON TWIGS at the Horseshoe, Monday, January 23. Rating: NNNN

Last July, Long Island’s the Lemon Twigs played second on a four-band bill for Dave Bookman’s no cover Nu Music Nite at the Horseshoe. Having just released their debut single, These Words, a month prior for 4AD, the teenaged brotherly duo were unknown at the time, and few Torontonians would remember the sparsely attended gig had ever happened. The band did, though.

On Monday night in a swamped Horseshoe, the elder D’Addario brother Brian wasted no time comparing the two shows. “It’s a full room!” he said with genuine amazement. “This is nice. On our first tour, we played here and it did not look like this.”

The Lemon Twigs’ steady ascension since the release of their debut album, Do Hollywood, last September has everything to do with word-of-mouth buzz. Do Hollywood was well received at the time of its release but seemed destined to become a cult favourite, like the work of the band’s biggest influence, Big Star. More people spent time discussing the wildly dated sartorial style of the D’Addarios than their music.

But their animated performances – as seen in clips of them playing The Tonight Show and Conan – were drawing new fans, and then in October, they absolutely up-staged another retro-obsessed rock band, Sunflower Bean, at the Garrison when they opened for them. Talk of that performance spread, and when tickets for last night’s show went on sale two weeks later, they were snapped up in a flash, and the venue changed from the Drake to the Horseshoe (though the even bigger Opera House might’ve been a better option).

As per usual, each brother got his own half of the set. Brian D’Addario went first, and while it took most of I Wanna Prove To You to get the vocals loud in the mix, by the end of the song everything evened out. He let loose during the circus-like Haroomata, hopping around while somehow nailing every riff, and threw in some covers: a minute-long rendition of R. Stevie Moore’s Carolyn Will You Come, followed by Love Stepped Out, written by their father, the obscure 70s rocker Ronnie D’Addario.

“This is the one you can dance to,” Brian announced before single These Words. “I call it the Twiglet Dance,” which he demonstrated, although he was too busy running laps and making his guitar sing to actually dance during the song. Piano-led soft rocker How Lucky Am I?, featuring harmonies by brother Michael and keyboardist Danny Ayala, ended the set’s first half. And then the switcheroo happened.

Michael took over vocals and guitar, quickly proving he’s the extroverted rock star in the band (despite  or in spite of having recently shorn off his trademark mullet). During Night Song, he broke out the windmills and scissor kicks, like Pete Townshend on amphetamines. He also seems to have the sharper wit, asking the crowd if they’d seen the animated movie Sing (he’s seen it three times) and announcing that he had two hamburgers from two different eateries that day.

But his finest exchange came during the only instance of sibling tension. “I want everyone to snap their fingers,” yelled Brian from behind the kit, just ahead of Baby Baby. “Don’t tell them what to do during my song!” Michael snapped. Nothing like the kinds of exchanges that have made the Gallaghers legendary, but still amusing.

They hinted at a new EP coming in the summer, played a track called So Fine that lived up to its name, covered Alex Chilton’s All Of The Time, leg-kicked through a rollicking As Long As We’re Together, and let a half-shirted Ayala take lead vocals on album closer A Great Snake.

Some feel the Lemon Twigs aren’t offering anything new, that all of this was already done and dusted 40 years ago. And, sure, everything about them – from the progressive-leaning pop/rock arrangements to the vintage rock threads – screams yesteryear. But what makes these teenagers so special and unique in this day and age is their dedication and commitment to their music and live show. It’s as if they’ve actually been honing their performance chops –harmonizing and hitting every note in a solo while running around like maniacs – since the 70s.

Borrowing so much from the past might seem regressive, but here’s hoping the Lemon Twigs’ bombastic style of rock and roll is the future. Because, let’s face it, 21st-century rock music has become a dull antithesis of what it was designed to be.