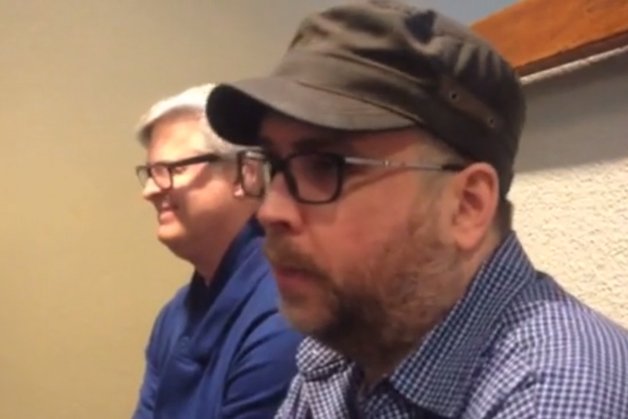 A local web developer hopes to make a sit-in outside Rob Ford’s office a permanent fixture at City Hall.

Chris Caple, a web developer who lives in the Queen and Don Valley neighbourhood, is the man behind robfordmustgo.com. He started the site as a way to organize a round-the-clock protest of the scandal-plagued mayor. When complete, the site will allow people to sign up to share protest duties in an attempt to ensure “a constant, rotating shift of citizens present in front of his office, all day, every day.”

Caple wants to demonstrate that “we are not a city that accepts Rob Ford’s behaviour and that we will not rest until he is no longer in office.”

As he and fellow demonstrator Geoff Martin took their place next to the elevator on City Hall’s second floor Wednesday afternoon, Caple told reporters he had been spurred to action by Ford’s recent attempts to have the Pride flag removed from the city’s ceremonial pole.

“His new open embrace of homophobia and bigotry has kind of pushed me over the line. It’s really not what Toronto is about. I’m just here to counter that, to do what I can,” he said.

In the wake of his drug and gang scandal many people, including a majority of councillors, have already urged Ford to step aside but he’s refused to budge. Caple said he’s not optimistic he’ll be the one to convince the mayor to quit, but that’s not the point.

“I’m not here for that. It would be great if he developed some sort of shred of a conscience and resigned. That’d be awesome. But I feel I just have to be here,” he said.

As of 7 p.m. Wednesday night Caple and Martin were gone, but two more people had taken their place.