Writer/director, co-writer and actor, The Hobbit: The Battle of The Five Armies 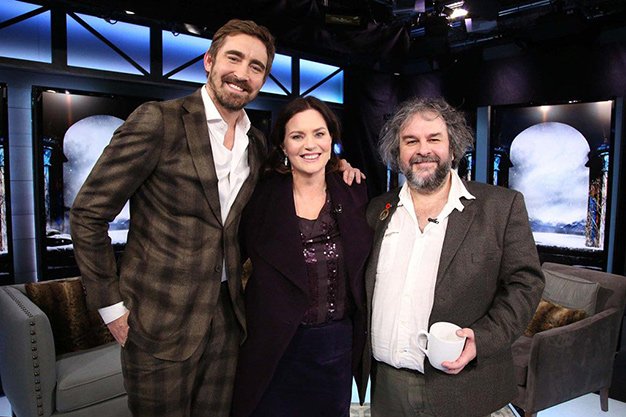 Peter Jackson has reached the finish line. The Hobbit: The Battle Of The Five Armies, his third and final instalment of J.R.R. Tolkien’s Middle-earth epic, is done and dusted, and the ebullient Kiwi filmmaker is taking a victory lap with one last press tour. Accompanying Jackson on the Toronto leg are co-writer Philippa Boyens – with whom he shared a best-adapted-screenplay Oscar for the final Lord Of The Rings movie, The Return Of The King – and actor Lee Pace, who plays the elf king Thranduil.

At a Saturday-morning round table in advance of the movie’s Canadian premiere, we talked about a lot more than can fit into this space. (Please listen to the audio clips at nowtoronto.com/movies. There’s a ton of stuff in there about Jackson’s plans for the extended version – and his desperate need for a vacation.)

Unlike the Lord Of The Rings trilogy, the Hobbit movies have a great deal of material that wasn’t in J.R.R. Tolkien’s book. Rather than cutting things out, you wound up putting things in. How did you approach that?

PETER JACKSON I don’t think people realize this, and obviously we probably disappointed a lot of people – but we were never adapting the Hobbit [as published in] 1937. We were adapting that Hobbit plus the material that he [retroactively] put into it from Lord Of The Rings, plus the appendices from The Return Of The King. We were adapting The Hobbit as it existed in the mid-50s once Tolkien had sort of fleshed it out more – and not all within the pages of one book.

PHILIPPA BOYENS Thranduil was an interesting character in terms of what we had to make up, and this is what’s really cool about Pete’s process. You get to work with the actor to figure out some of the character’s backstory. We did that with Thranduil because there’s not a huge amount in [the text]. But the whole story narrative of his being an isolationist, that’s layered in there…

Lee, you didn’t work on The Lord Of The Rings, so what was it like for you as a newcomer to Middle-earth?

LEE PACE Honestly, the most inspiring people I’ve ever worked with. There are all these disparate actors kinda working on it and we’re all telling the same big, big story [even though we’re all] coming onto a green screen where we don’t know what this battle really is going to look like.

JACKSON I didn’t know what it was gonna look like either. Glad you didn’t ask me too many questions.

Peter Jackson on completing the trilogy, and how the entire Rings cycle should be watched.

Jackson and Philippa Boyens on how it feels to have finally delivered the last movie.

Jackson and Pace on realizing Tolkien’s world on screen.

Jackson on the value of extended cuts, and why he won’t be revisiting the movies down the road.