How to build a different kind of toy story 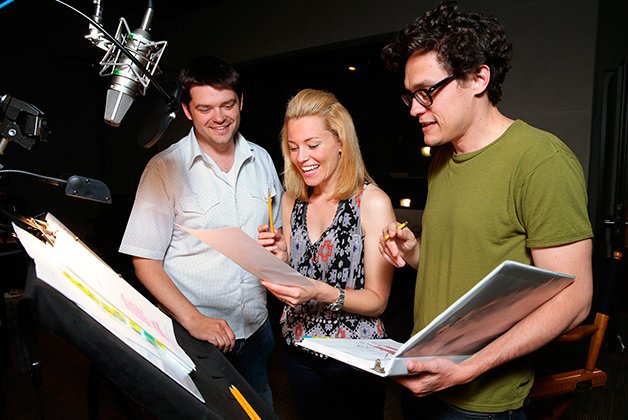 THE LEGO MOVIE written and directed by Phil Lord and Christopher Miller, from a story by Lord, Miller, Dan Hageman and Kevin Hageman, with voices of Chris Pratt, Elizabeth Banks, Will Ferrell and Will Arnett. A Warner Bros. release. 100 minutes. Opens Friday (February 7). For venues and times, see Movies.

Phil Lord and Christopher Miller are used to playing with reality.

In their wonderful TV series Clone High and their feature film work, they’ve played with the distinction between straight storytelling and self-aware parody. When characters in the animated Cloudy With A Chance Of Meatballs or the live-action 21 Jump Street comment on the absurdity of their situation, it’s part of the fun.

“We enjoy crossing back and forth over the line between what’s real and what’s not,” Miller says.

They’re antic deconstructionists, really. Which is why it’s so much fun to see their sensibility shine through in their new animated adventure, The Lego Movie.

“What’s interesting about Lego is it’s constantly reminding you that it’s a facsimile of something else,” Miller says. “It’s a reproduction of the Taj Mahal or a police car or whatever. That’s stimulating to us artistically I think it’ll always be a hallmark of our work. It’s real, we’re trying to really hook you, and we’re trying to convince the audience to invest emotionally in this moment, and then the very next moment we slap everybody and say, ‘Just kidding! This is all fake.'”

The genius of The Lego Movie is that it busts out each new insane plot development with the unhinged enthusiasm of a child spinning a story to entertain himself.

“It was always our hope to make a movie that felt like it was from the mind of an eight-year-old,” Miller says.

“Which was not difficult, given the filmmakers,” laughs Lord.

“That was sort of a guiding principle,” Miller continues. “And what’s great about Lego is that you have all this infinite possibility, all this [potential] creativity, and you have licensed characters who could interact with each other in a way you can’t do with any other movie.”

“That’s kinda how you played with Lego when you were a kid, and how kids play with them now,” Lord says. “We wanted it to have that logic that doesn’t really have [any] underpinnings but kind of feels right. We worked hard just to do that, and we felt that if we told a coherent emotional story and you were invested, then we could be really illogical with everything else in the movie.”

“The trick was to find a story that actually worked on an emotional arc at the same time,” Miller says. “If you had an eight-year-old tell you a story for 90 minutes, it would make you sleepy.”

The other characteristic that defines their work is its endless optimism, which sets them apart from animators who make movies about bickering prehistoric mammals or farting minions.

“We try to avoid any mean-spirited humour and just have it be fun,” Miller says. “Just from a psychological standpoint, it’s really helpful having films with a joyful message and positivity, so we try to do that with all our movies, really.”

“We have a friend, [producer] Lindsay Doran,” Lord says. “She gave a TED talk about positive films and why somehow those films don’t seem as important to us.

“We obviously disagree,” he laughs, “and think [The Lego Movie] should win the Oscar.”

Phil Lord on the duo’s need to keep adding jokes up to the last possible second: