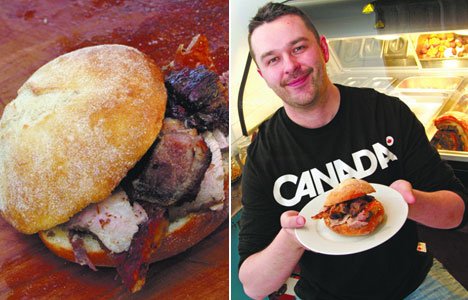 The chinese lunar calendar may say that 2011 is the year of the Rabbit, but here in Hogtown it’s the year of the Pig. How else to explain the propensity of the other white meat to pop up on menus virtually everywhere, the more exotic the cut the better?

Just down the block from the Black Hoof, Nick auf der Mauer’s Porchetta has only one thing on its mind: pork, and more specifically the slow-roasted Italian-style pork that gives his month-old take-away its handle. That’s chef wielding the electric carving knife behind the counter singing along to the Foo Fighters.

“Nobody else was doing it,” says the former Drake sous chef. “I could have done a burger shop or poutine or burritos or fish and chips, but I wanted to do something that’s my own. The name came first, then the concept.”

And what a concept! Auf der Mauer starts with naturally raised Beretta shoulder, which he marinates in garlic, olive oil and lemon zest for 24 hours before wrapping it in thickly sliced prosciutto and a fatty outer layer of fennel-cured pork belly. After several hours in a slow oven, the mutant bundle emerges looking like a cross between a football and a pineapple.

You can order it two ways, first as a basic 4-ounce sandwich ($5.95) served on a lightly toasted sourdough pada bun from Caldense Bakery across the way, best optionally spread with sinus-searing Dijon or gussied up à la California Sandwiches with old-school tomato sauce (25 cents) and shaved mozzarella (75 cents). Each bite is a surprise, one lean and sweet, the next crispy-skinned crunchy or slippery with fat.

Best to order it as a 5-ounce plate ($8.95) so you can appreciate the myriad tastes and textures of the varying strata of pork. Sides include choice braised rapini with garlic, baked romano beans or roasted new potatoes, though I prefer to pair it with those little round olive-oil-drizzled spuds from the Portuguese churrasqueira a few doors down. Though it isn’t advertised, you can just buy a pound of porchetta for $19.95.

Any leftover trimmings find their way into soup ($3.95 12 ounces/$4.95 16 ounces), today an outrageously creamy chowder thick with navy beans and finished with bitter greens and a squirt of truffled mayo, another day a smoky minestrone thickened with buttered bread crumbs. With food this pork-tastic, is another Porchetta in the works?

“Maybe not right away,” laughs auf der Mauer. “But I can definitely see myself driving around the city in a Porchetta truck.”