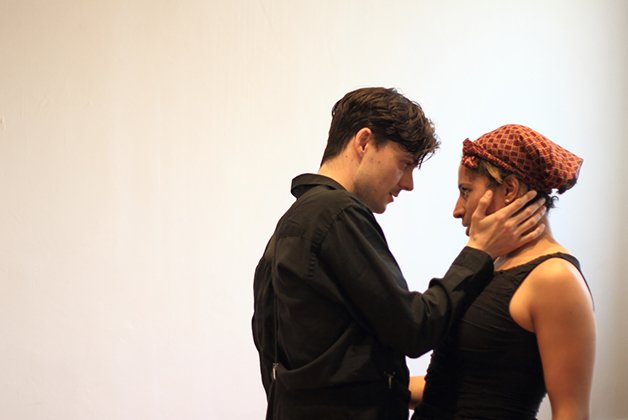 Project organizers chose four of her short works, all presented at the Downstage.

The festival proves two things: that Churchill can’t be pigeonholed as a certain type of playwright, concerned with a single theme or style, and that Toronto’s indie theatre community is full of sharp actors and directors.

The earliest of the plays, Vinegar Tom, is a meditation on patriarchal power seen through the lens of 17th century British witchcraft trials. Using music-hall turns, a series of interpolated contemporary songs (by Chris Reineck) and powerful scenes in which women in a small village are accused of dealing with the devil, Churchill makes the point that women who are outsiders in various ways – not wanting to get married, taking pleasure in sex, not wanting to have children, being nonconformist or simply old or poor – are castigated by the God-fearing community. When livestock die, butter won’t churn and men lose their erections, a farmer and his wife (John Gordon and Madeleine Donohue) look for the cause to their neighbours, an indigent senior (Lynne Griffin) and her sexual daughter (Sabryn Rock).

Sometimes the storytelling is broad and two-dimensional, but Neoteny Theatre’s director Carly Chamberlain and her talented actors – including Sophia Fabiilli, Kelly Penner, Keelin Jack and Jessica Moss – swirl the multiple scenes around the small performing space. The production’s standout moment is the old woman’s descent into mad cursing, a potent scene that Griffin plays so intensely that the audience is shaken by its end.

Cart/Horse Theatre’s A Number also deals with the parent-child relationship through a tale of cloning. Salter (Mark Whelan) meets three of his cloned sons (all played by Craig Pike) in separate scenes as he tries to find the original offspring, whom he loves most. Since we hear different versions of the past as he talks to his trio of children, we’re not sure which is the truth.

Whelan’s performance begins in a low-key fashion he needs more layers, and we don’t relate to him until partway through the show. But under Matthew Gorman’s direction, Pike finely distinguishes the three sons: the nervous and twitchy Bernard 2, the nastily self-confident Bernard 1 and Michael, content with his life. Pike holds himself differently as each man, giving every one a unique speaking style.

The other two shows deal with relationships. Three More Sleepless Nights, presented by Bad Joe, is comprised of three La Ronde-like two-handers in which characters rotate from one bedroom scene to another. The first, with Diana Bentley and Ryan Rogerson, is the strongest piece of writing she accuses him of an affair, he says he ended it, and both reveal the unhappiness in their 10-year marriage. Director Sarah Kitz and the actors play with the difficult rhythms beautifully, pacing the speeches so that while lines overlap, each word is clear.

In the second episode, an insensitive husband (Jeff Margolis) calms his uneasy wife (Chala Hunter) by telling her the plot of Alien. In the third, Bentley and Margolis are now a couple and, though each talks about being different, nothing in their lives or personalities has changed.

Drunk Enough To Say I Love You is the most sensual of the four plays as Sam seduces Guy both sexually and politically. Sam represents the United States while Guy is any other country that comes within America’s sway. Directed by Circlesnake’s Alec Toller, who’s cast two women (Claire Armstrong and Caitlin Driscoll) to give another spin to the intense material, the production is hot and often shocking in the way the pair discuss chemical warfare, the environment, drugs and torture. Guy sometimes misses his family and sways back in their direction, but he can’t stay away from the amoral Sam, who requires total commitment from his lover.

While the material is exciting in the hands of the actors, the delivery doesn’t always work a staccato quality is necessary here, but Toller’s encouraged a choppy stop-start delivery that doesn’t work with the script’s need for rapid-fire delivery and quick-jumping thoughts.