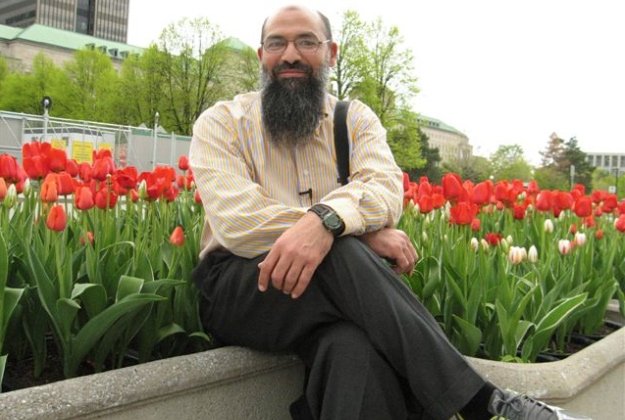 There’s a new twist in the security certificate case of Egyptian-born Torontonian Mohammad Mahjoub, who has been detained or under house arrest in Canada for more than 12 years. He’s now been declared innocent of crimes in his homeland.

One of many Muslim men arrested under the onerous certificates in the early 2000s, Mahjoub has been deemed a threat to national security without ever fully learning the reasons.

He has a complicated backstory that includes working as an agricultural engineer for a farm owned by Osama bin Laden in the early 1990s and coming to Canada as a refugee on a fake Saudi passport, but hasn’t publicly been accused of any crimes by our government. But in 1999, after he was already here, he was convicted in absentia in Egypt of disturbing national security and general order, part of a 107-person military trial that targeted enemies of dictator Hosni Mubarak. He was sentenced to 15 years imprisonment with hard labour, and the following year, he was arrested in Canada.

But now that Mubarak has been deposed and discredited and the Muslim Brotherhood is in power in Egypt, Mahjoub and his co-accused have been systematically let off the hook. According to translated court documents, the reasons for the acquittal are numerous, and include that evidence was obtained through torture, that civilians are not supposed to be tried in military courts, and that the law under which Mahjoub was charged was repealed last year.

The acquittal came November 20 and was presented to the judge in Mahjoub’s Canadian proceedings in early December.

Once a central part of the government’s case against Mahjoub, the Federal Court ruled the Egyptian conviction inadmissible in June 2010. That means the Egyptian acquittal shouldn’t have a direct link on the case. But it might anyway, says one of his lawyers, Yavar Hameed.

“It often appears as though we’re facing innuendo (about Mahjoub’s alleged crimes) as opposed to direct allegations,” he said, noting that early in the case, CSIS was also using Mahjoub’s employment by bin Laden as evidence against him. “It was a legit company. He was working in a legit position. He is an agricultural engineer. Bin Laden employed thousands of people in Sudan in legitimate businesses. CSIS has completely retracted that as an allegation.”

NOW contacted both federal ministries responsible for security certificates for comment on this case. A Public Safety Canada spokesperson declined comment, while Citizenship and Immigration Canada did not respond at all.

Mahjoub was in the midst of his latest round of security certificate hearings, part of an ongoing process to determine whether the detention order is reasonable, when he learned of his Egyptian acquittal. It means there are now no charges or convictions against him anywhere in the world — a bittersweet detail for a man who was locked up for about eight years and still needs a surety’s accompaniment to leave the GTA.

“If there were reasonable grounds (to keep Mahjoub detained), there would probably be a police investigation,” Hameed notes dryly. “But the RCMP isn’t investigating.”

The Egyptian news goes a long way to show how poorly Canada vetted the information it has used against Mahjoub, Hameed says, adding Canada must have known it was evidence from torture or they didn’t do their research.

“It has been a Kafka-esque comedy of bureaucrats who don’t have a clue what they’re doing — or scarier, they are extremely manipulative, ideologically driven and willfully blind,” Hameed said. “CSIS could have asked the right questions but they were more than willing to let just any information in.”

“This judgment is the final nail in the coffin of establishing just how inept CSIS has been in this investigation,” Hameed told NOW. To date, Canada’s mistakes include stealing Mahjoub’s legal documents, destroying evidence against him and listening in on calls that should have been covered by solicitor-client privilege.