Catherine Graham wins the Battle Of The Bards 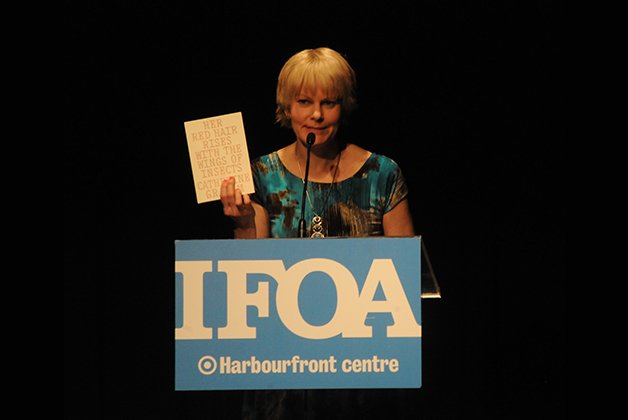 Poetry is an ancient art, but if the action at Harbourfront on Wednesday, April 2, was any indication, its heartbeat is as strong as ever.

A packed house at the Brigantine Room was held rapt by 19 poets competing in the sixth annual Battle Of The Bards – hosted by yours truly – to see who best interpreted their own work.

Catherine Graham won the competition for her strong presentation of poems riffing on grief and remembrance published in her collection Her Red Hair Raises With The Wings Of Insects. The prize: a spot at the 2014 International Festival Of Authors and an ad for her book in NOW, which was a sponsor of the event.

The poets covered a huge range of styles and themes. I was impressed by Kate Marshall Flaherty’s readings related to her ailing parents – you get the sense she’s been onstage as an actor. Aisha Sasha John showed strength reading a series of intimate pieces.

Given the intensity of much of the material, JonArno Lawson’s aphorisms stood out, as in “Death is the last thing I want to experience.” Sarah Yi-Mei Tsiang’s cheeky spinoffs on Facebook statuses added more comic relief.

And how many times will you hear a reference to Toronto’s sad hockey team at a poetry contest? Thank Chris Pannell for changing the game.

But, really, there wasn’t a dud in the bunch. And they kept to their five-minute limit. You don’t see that very often either.