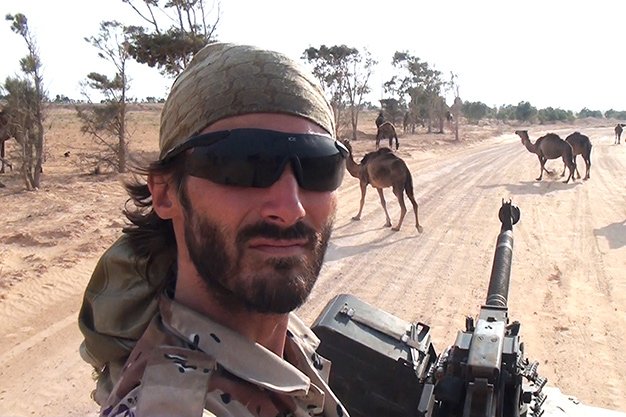 In the late 2000s, a sheltered Baltimore man named Matthew VanDyke decided he was going to give himself a “crash course in manhood” by motorbiking across Africa in search of adventure.

He didn’t find much, apart from crashing his bike a couple of times, but he did make a few friends. One of them was from Libya, and when that country exploded in civil war in 2011, VanDyke smuggled himself and his camera in to embed himself with the rebel forces out to depose Muammar Gaddafi.

Point And Shoot is not directed by VanDyke, but by Marshall Curry (Street Fight, Racing Dreams), who’s distilled hundreds of hours of VanDyke’s self-glorifying footage into a fascinating narrative. He also forces his subject to confront that narrative in a post-facto interview that becomes the spine of the documentary.

Curry’s editorial approach lets us see that VanDyke is perhaps not the most emotionally mature individual, which tempers the impulse to write him off as another adrenaline junkie out to make a name for himself in the stupidest way possible. And it turns a narcissist’s homemade adventure videos into a fascinating hall of mirrors.