The Campaign Life Coalition rallied at Queens Park on Tuesday (February 24) against the new provincial curriculum for sex education.The. 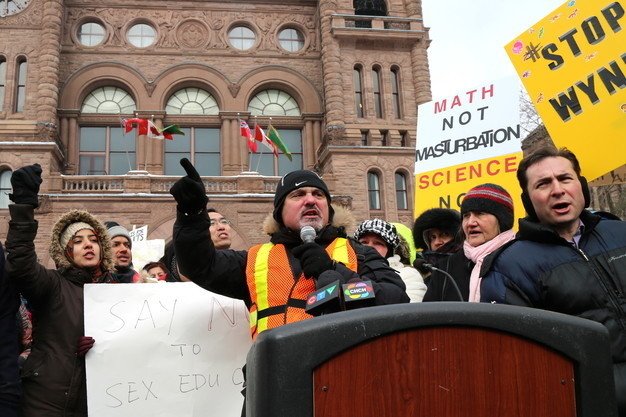 MPP Monte McNaughton|Weve gone too far outside normal sex practices and this is where we are heading. Im embarrassed. It's going to prompt [children's] thinking toward things that are not normal. Neveen Corayem|For Valentin Lossev of the Russian Congress of Canada

The Campaign Life Coalition rallied at Queens Park on Tuesday (February 24) against the new provincial curriculum for sex education.

The event was MCed by former TDSB trustee Sam Sotiropoulos who implored the media not to portray the people who are gathered here today as religious fanatics, social conservatives who ought to be dismissed. Thats not the case. These are parents of the very children that this education is indented to pervert.

According to the Ministry of Education, the curriculum (last updated in 1998) will now include teaching about consent, online safety and the risks of sexting, and provide kids sexual health information. It will also be introduced to earlier grade levels as statistics show girls are entering puberty sooner than previously expected.

There are some worthy elements of this curriculum said Conservative MP Patrick Brown, a Wayne Gretzky-endorsed candidate for the Progressive Conservative Party of Ontario leadership who took a somewhat conciliatory approach. Parents must be given reasonable access to the lesson plans and learning materials to be used so they can decide if their child is ready.

But the crowd was more enthusiastic for Rob Ford-endorsed PC leadership opponent, MPP Monte McNaughton, who said the government did not properly consult with the public. They have shut parents completely out of this process and it’s wrong on so many fronts.

Jack Fonseca of Campaign Life pumped up the crowd by asking: Do you feel more comfortable that the Liberal government enlisted the help of a child-pornographer to develop the new sex-ed curriculum? To which the crowd chanted, We say NO!

Fonsecas call and response oratory went on to argue the new curriculum could groom children so as to make them sexually available to children and adults. Shame!

He warned the crowd that gender identity might be taught as a social construct, not necessarily connected to your physical anatomies. Shame!

At this point I believe that Catholic school would be the best route because they do have the ability to tweak this curriculum so it can be moral and age appropriate, protest co-organizer Sandra Halill said.

My sex education was a combination of knowing about every sexually-transmitted disease under the sun but not knowing how you get them. It was about fear. I did not learn about consent, I didnt learn that queer people even exist.

Consent starts with teaching kids they have a right to their bodily autonomy. It’s one of the most crucial things you can do to show kids to relate to each other as equals.