NOW MagazineNewsAlok Mukherjee to stay on as police board chair

Alok Mukherjee to stay on as police board chair 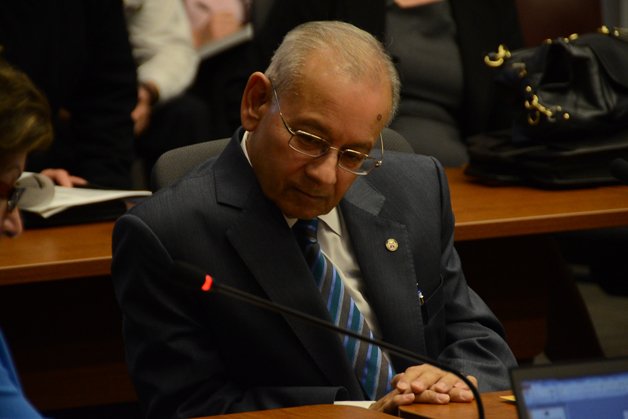 Alok Mukherjee appears to have survived an attempt to remove him as chair of the Toronto Police Services Board.

Going into Monday’s meeting of the force’s civilian oversight board, it was unclear how members would respond to the police union’s demand that Mukherjee resign over a meme about U.S. police killings he posted on his personal Facebook page earlier this month. Mukherjee had refused the demand, claiming he had become the target of a Toronto Police Association “smear campaign” because of his efforts to reform the department and reduce its budget.

But in a closed-door session Monday morning, the board decided not to discipline Mukherjee.

According to a report placed on the agenda by the board’s acting vice-chair Dhun Noria, Mukherjee wrote a letter to the board on December 10 in which he “recognized an error in judgment, expressed his sincere regret and satisfactorily explained his intent and purpose in the posting. Upon its consideration and deliberation on this matter, the board decided that no further action was required.”

In the closed session Mukherjee also responded to questions about a second Facebook post, dating back more than a year ago, which appeared to make light of domestic violence. Based on his responses, the board decided to take no action on that issue either.

Mayor John Tory, who has taken a seat on the TPSB in an effort, he says, to repair its strained relationship with the force’s rank and file, was attending his first meeting of the board. He told reporters afterward he was pleased Mukherjee had responded to the union’s complaint. But as he has since the controversy around the board chair erupted, the mayor gave Mukherjee only a lukewarm show of support.

Asked if Mukherjee has his confidence, Tory chose his words carefully. “I’m very satisfied with the way in which we resolved those matters today,” he said.

He was similarly tightlipped when a reporter asked if he hoped Mukherjee would be reappointed as chair next year. The board must either reaffirm its support at their first meeting of 2015 or select a new leader. “Today’s not the way to deal with that,” Tory said.

Mukherjee does have the backing of another new board member, however. Councillor Shelley Carroll, who along with Tory and Councillor Chin Lee were officially sworn in on Monday, said Mukherjee “absolutely” has her support.

The post that sparked the call for Mukherjee’s resignation was originally created by an Occupy Wall Street group, and compared the relatively small number of Americans killed by ISIS militants and ebola to the thousands who die at the hands of police every year. The post’s creators had included the caption “Just a reminder of who the enemy is” and above it Mukherjee wrote “I can’t breathe,” a reference to the last words of police choking victim Eric Garner, which have become a common slogan at ongoing protests against cop violence in the U.S. in recent days.

On December 5, less than a day after it was posted, the TPA issued a release in which it said Mukherjee’s decision to share the meme showed he was “unprofessional,” “unethical,” and “clearly seeks to undermine the very people he is paid to oversee.”

In his letter to the board, Mukherjee explained: “The meme struck me as a very dramatic way of presenting a serious issue that was receiving extensive attention and worthy of meaningful discussion. I felt that it would generate a lively conversation among my ‘friends’ about police-community relations. I must state categorically that I had absolutely no intention of disparaging, accusing or calling into disrepute policing in Toronto.”

He noted that his Facebook page also contained several posts that “pay compliment to the work and the contribution of our police officers.” Mukherjee has since deactivated his Facebook page and told the board it will remain inactive for as long as he is a member.

TPA president Mike McCormack did not immediately return a request for comment.

The controversy around Mukherjee occupied only a portion of the meeting, which was otherwise dominated by discussion of a recent report that found there is still “widespread dissatisfaction” with police interaction with the public in 31 Division, despite reforms made to practice of police “carding.”

The report found that very few members of the community were aware that the reforms had taken place, and that 71 per cent of residents believe officers are still engaged in racial profiling. Around 20 people made deputations to the board, most of them advocating that carding be stopped altogether. The board opted to continue pursuing reforms instead, however, and instructed Chief Bill Blair to review the issue and report back in February.