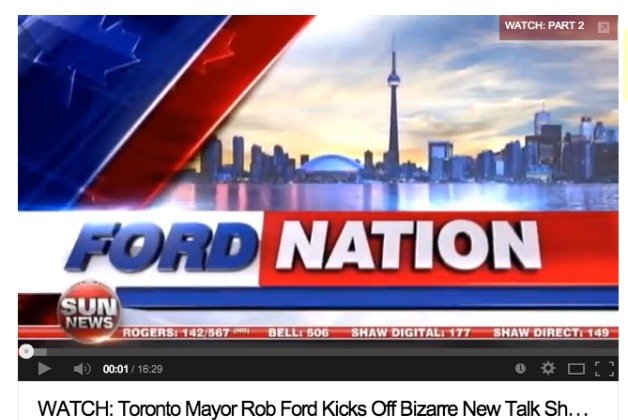 Rob Ford jokes about drinking to excess in the latest installment of Ford Nation on Youtube posted on Friday.

Mayor Ford has repeatedly denied having a drinking problem, but has admitted to being drunk in public and to smoking crack while “in one of my drunken stupors.”

In the new video segment titled “Fan Questions,” the mayor’s brother, Councillor Doug Ford, reads aloud a series of letters purportedly from supporters. One letter that Doug says is from Niagara Falls congratulates the mayor and advises him to “shut your office blinds, grab a beer, throw your feet up on top of the desk, and kick back.”

“Rob doesn’t do that, I’ll tell you that,” Councillor Ford says.

But Mayor Ford interjects, laughing. “It wouldn’t be just one beer, that’s the problem,” he says.

The mayor’s spokesperson did not immediately respond to a request to clarify the remark.

Despite denying he is an alcoholic, Ford pledged to stop drinking after admitting in November that he smoked crack while inebriated. At the time he said he was getting “professional help” but never specified what kind of treatment he had sought out. He has since reportedly been intoxicated in public on at least three separate occasions, most recently two weeks ago outside of City Hall.

Court documents used to obtain a warrant against the mayor’s friend Alexander Lisi revealed that former staffers suspected that the mayor was sometimes intoxicated while at work. The documents have not been proven in court.

In another Youtube segment posted Friday called “From Jamaica With Love,” Ford imitates a Jamaican accent, as he did in January when he was taped ranting in patois at the Steak Queen restaurant.

“These [letters] are ‘rom all over the world. I got one from Jamaica too,” says Doug.

Doug then asks if the mayor plans to go to the Caribbean island.

Meanwhile, the mayor continues to assert that he has been cleared of any wrongdoing in the investigation the police launched last year in relation to the crack video.

After launching the city’s annual spring clean-up event in the City Hall rotunda on Friday, Ford held a brief scrum in front of his office.

Ford called the investigation, which at one point involved a police surveillance aircraft, “a waste of taxpayer’s money.”

The Ontario Provincial Police took over supervision of the case last month over accusations by the Fords that Chief Bill Blair was biased. This week, the OPP said it was stepping back from the case. OPP spokesperson Sgt. Pierre Chamberland said Friday no one at the provincial force is currently involved in the case.

Chamberland added that that could change if the Toronto Police, whose detectives are conducting the probe, come forward with new evidence they want the OPP to review. The TPS maintains that the investigation is ongoing and that it’s inaccurate to say that Ford has been cleared.