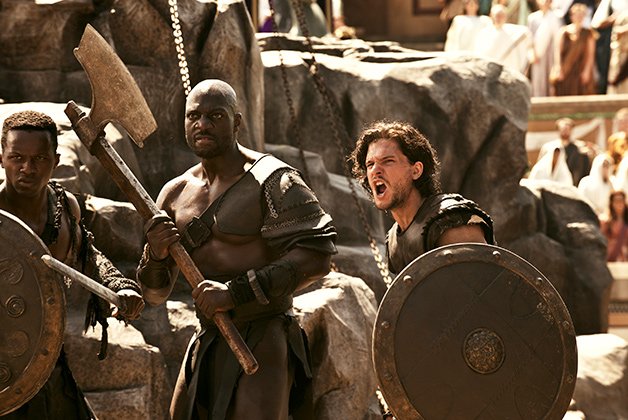 Actually, that’s not fair. Toronto’s resident Resident Evil director did a decent job on that Three Musketeers movie a couple of years back, so he’s certainly capable of stretching. Perhaps he’s simply not suited to the complexities of a swords-and-sandals apocalypse picture like Pompeii, a low-rent mashup of Spartacus and Titanic geared toward an audience too young to have seen either one.

Anderson’s clearly more concerned with the third-act CG pyrotechnics than he is with the first hour-plus, which establishes the budding romance between a star-crossed gladiator (Kit Harington, the know-nothing Jon Snow on Game Of Thrones) and forward-thinking young Cassia (Emily Browning of Sucker Punch and Sleeping Beauty) in the days leading up to the eruption of Mount Vesuvius.

This allows the movie to alternate between subpar fight sequences and dull conversations about the glory of Rome between Cassia’s parents (Jared Harris and Carrie Anne-Moss) and an eeeeevil senator (Kiefer Sutherland, fully aware he’s playing the Billy Zane role).

And then Vesuvius blows, at which point Pompeii leaps into full “Romeo and Juliet witness historical disaster” pitch. You’ll see every beat of the story coming, although the 3D glasses do make it kinda murky at times.