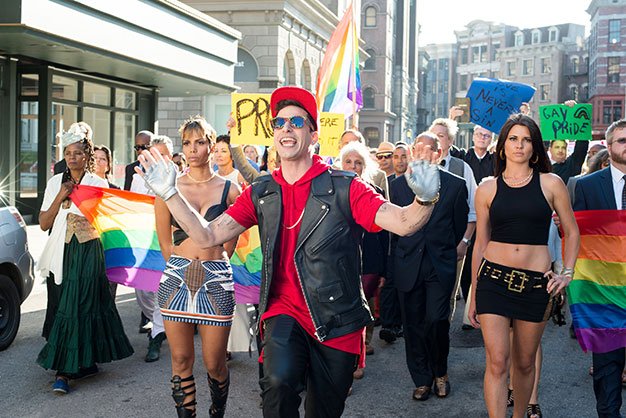 Popstar: Never Stop Never Stopping is the former Untitled Lonely Island Feature, and if youre familiar with Akiva Schaffer, Jorma Taccone and Andy Sambergs enthusiastic swagger from their albums or their breakout Saturday Night Live digital shorts… well, Popstar amplifies that to a gargantuan scale.

Popstar combines the pop savvy of the trios SNL work with the filmmaking skills honed on projects like Hot Rod and MacGruber. (All three write and star, with Schaffer and Taccone sharing directorial duties this time around.)

Its the entirely cliched behind-the-music story of Conner4Real (Samberg). Once a member of the Style Boyz, Conner let the group fall apart as he embraced solo success keeping producer/DJ Owen (Taccone) while songwriter Lawrence (Schaffer) left to become a farmer.

Now a cheerful and utterly self-absorbed rock god, Conner is trying to keep his massive concert tour going as the world rejects his latest album turning his relationship with his girlfriend (Imogen Poots) into a public spectacle, recruiting a rising rapper (Chris Redd) who steals his spotlight and pushing away the handful of real friends he has left.

Theres nothing new here in terms of story and, as a character, Conner doesnt have the go-for-broke trickster energy of Aldous Snow, the debauched icon Russell Brand played to perfection in Forgetting Sarah Marshall and Get Him To The Greek. But Sambergs essential sweetness keeps Conners cluelessness from turning too sour, and his energy makes Lonely Island arena rockers like Finest Girl and Equal Rights surprisingly credible while remaining totally ridiculous.

Popstars not revelatory, but its an awful lot of fun. With Schaffer, Taccone and Samberg goofing on recording industry cliches and finding perfect roles for pals like Tim Meadows, Will Arnett and Justin Timberlake, its impossible not to get caught up in all the dopey dopeness.