Activists disrupted a work site outside of Port Hope, Ontario, yesterday where Enbridge is testing its Line 9 pipeline. Enbridge. 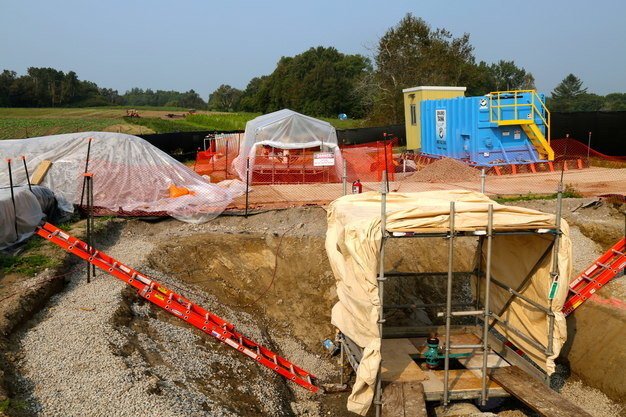 Activists disrupted a work site outside of Port Hope, Ontario, yesterday where Enbridge is testing its Line 9 pipeline. Enbridge reps need to demonstrate that the 40-year-old pipeline is safe to carry 300,000 barrels a day of diluted tar sands bitumen between Sarnia and Montreal.

After requests from the Ontario government and municipalities along the pipeline route to conduct hydrostatic testing, National Energy Board (NEB) ordered Enbridge to do so on three sections of the pipeline. The test involves pumping pressurized water through the pipeline to check for cracks or other types of weaknesses.

The activists from a group called Rising Tide believe Line 9 poses a significant risk of an eco-disaster like the one caused by a rupture of Enbridge’s Line 6B in Kalamazoo, Michigan, in 2010.

We know that Enbridges top concern is not safety, its profit, says Rachel Avery of Rising Tide. Whatever testing they are doing is to ensure they can operate this line as soon as possible to satisfy their suppliers and that is without regard to the environment and [impacted] communities.

Enbridge reps had previously resisted the testing, citing in its 2013 Line 9 application to the NEB potential detrimental effects of hydrostatic testing. The company argued the pressurized water has the potential to induce or grow cracks that do not fail during the test but may continue to grow in-service.

The company aims to open the line by the end of the year, notwithstanding an ongoing appeal of the NEB approval by the Chippewas of the Thames First Nation for the failure to meaningfully consult with the community.

In addition, Toronto City Council passed a motion earlier this year calling for the company to install emergency shut-off valves on either side of major water crossings in the city.