NOW MagazineNewsPot may be a cure-all

Pot may be a cure-all 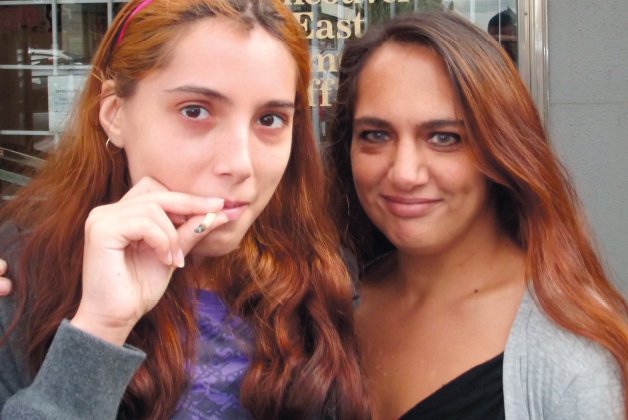 Hayley Rose just celebrated her 21st birthday. That’s six years longer than her doctors thought she would live, and she partly owes her life to medical marijuana.

She was diagnosed with a severe form of childhood-onset epilepsy called Lennox-Gastaut syndrome when she was seven. The difficult-to-treat form of epilepsy involves frequent and multiple types of seizures and kills most children well before puberty.

Hayley’s doctors told her mother, Cheryl, to find a grief counsellor and prepare for the worst when Hayley was 15. Cheryl took matters into her own hands and started her on a course of cannabidiol capsules, CBD-enriched foods and smoothies. The strain of cannabis was donated by a grower. They call it Hayley’s Comet.

So effective was the treatment that seven to eight weeks after she started it, an electroencephalograph, or EEG, from BC Children’s Hospital showed that she no longer had encephalopathic epilepsy, meaning her LGS grand mal seizures were essentially gone.

Hayley went from seizing all but two days a month to 17 days without a seizure.

She still has epilepsy, and her seizures are hormonally activated, but medical marijuana has reduced her nightly incidence of grand mal seizures, so severe that she was biting off chunks of her tongue, from nine to 12 to almost none.

The difference is so stark that Cheryl says Hayley’s a different person today.

“In 2008, before cannabis, Hayley was reading at Grade 2 or 3 level. Now she’s on the second book of Narnia,” Cheryl says.

“Over time it’s made her the oldest, healthiest, happiest person with LGS epilepsy living on the planet.”

Changes to Canada’s medical marijuana laws have made Cheryl fear that Hayley may no longer have access to the life-saving medicine she needs. As of this month, the federal government’s Marihuana Medical Access Regulations make patients switch to licensed producers.

An injunction won by BC lawyer John Conroy has put a stop to the disposal of personal medicinal marijuana plants until a future court ruling.

If those regulations go into full effect, Cheryl says, Hayley will die.

“When she started the cannabis, it knocked out all of her grand mal seizures,” she says.

Given that the new regulations restrict personal possession to 150 grams at a time, and this is not reversed by the injunction, Hayley’s in a tight spot. She requires 40 grams a day to maintain her mostly seizure-free life.

“It would cost me thousands of dollars a month,” and the marijuana isn’t prepared properly for Hayley’s needs, says Cheryl.

“Because I can’t afford it, that puts her life at risk,” she says. “It’s cannabis or death.”

Asked how the government can justify putting families with fixed incomes in such dire situations, Minister of Health Rona Ambrose responded by saying the program needed discipline.

“We had a very serious problem with home grow ops and criminal diversion of marijuana,” said Ambrose.

While the minister said the government “took good advice from the RCMP and other police services across the country on how to constrain some of the criminal element,” no evidence of heightened levels of crime have been provided to support this claim.

The minister did raise some interesting points about the clinical trials necessary for drug regulations.

“Health Canada does not endorse medical marijuana,” she said. “Clearly, people need to understand it is not a medicine, in the context that it has not gone through clinical trials like any other medicine has.”

Clinical trials are about to begin on a strain of medical marijuana used for epilepsy patients in the U.S.

Jesse Stanley’s cousin had stage 4 pancreatic cancer, and after he started treatment with CBD oil “he ended up living six or seven months longer” than the doctors had given him.

Stanley and his six brothers began developing of a strain of cannabidiol-intense, low tetrahydrocannabinol marijuana when studies showed CBD stopped ovarian and breast cancer from metastasizing.

In the early days, they didn’t know what there were doing. “It was really just a shot in the dark,” says Stanley.

It wasn’t until the Stanley brothers met a little girl named Charlotte that everything came together.

Charlotte suffered from an extreme form of epilepsy called Dravet syndrome. At two, she was having 300 grand mal seizures a week. They were so severe that her medical file included a “do not resuscitate” order.

When her mother, Paige Figi asked the brothers to treat Charlotte, Stanley said, “We thought about it and said, ‘Why not? The strain is non-psychotropic, and it’s worth a shot.”

“It was at that point that she took her first dose, and she went a week without having a seizure for the first time in her life since she was three months old.”

The brothers named the strain Charlotte’s Web, and since then the Figis, Charlotte and the Stanley brothers have gained international recognition.

“The efficacy of Charlotte’s Web is through the roof,” says Stanley.

After CNN’s Dr. Sanjay Gupta became a very public medical marijuana supporter while filming the documentaries Weed and Weed 2, featuring Charlotte Paige’s success, and since the legalization of pot in Colorado, “marijuana refugees” have started emigrating to the state.

“It’s rewarding for sure just to know that we’re a part of giving families hope,” says Stanley, “because a lot of families have tried everything.”

He estimates they currently treat 350 patients and have thousands more on a waiting list.

He’s quick to clarify that. “We don’t know that it’s going to work for everyone, and we don’t claim it does.”

Patients pay $200 to $300 a month because the Stanley brothers have kept their prices low.

“Honestly, it’s still too small for us, he says. His brothers have just returned from a fact-finding mission in Uruguay where they’re looking to do clinical trials and grow the strain.

They’re currently looking at growing it in Ontario as well. A grow op with 600,000 square feet of space is available for Charlotte’s Web, which is so low in THC that it’s considered hemp and is legal for export and import.

Says Stanley: “I want to offer that hope to people in Canada that it’s coming.”

One Canadian family couldn’t wait. The Pogsons moved to Colorado last year for the sake of their daughter Kaitlyn, who suffers from the same form of epilepsy as Charlotte.

The Pogsons were unavailable for an interview but still live in Colorado. They saw success within weeks of starting treatment.

Arthur Schafer, director of the Centre for Professional and Applied Ethics at the University of Manitoba, is torn between the negative effects THC has on the developing brain and a successful treatment.

When asked if he would treat his children with Charlotte’s Web, Hayley’s Comet or CBDs, Schafer responds, “Yes, if necessary, I would take my child to Colorado.”

He laments the lack of hard scientific evidence either for or against the use of CBDs in treating any condition, but says because Big Pharma can’t capitalize on a natural substance, there’s been a lag in research.

“It’s really too bad that we haven’t long before now had good clinical trials establishing scientifically the benefits of medical marijuana, in particular high-CBD medical marijuana for children with epilepsy.”

While studies are under way in Israel, the U.S. and Canada, there is no scientific, peer-reviewed evidence that medical marijuana is effective in the treatment of any disease.

Schafer believes we lack evidence-based research for marijuana because the pharmaceutical industry is Health Canada’s client. “The very budget and existence of Health Canada is dependent financially on the drug industry,” he says.

“The government made a decision that the research capacity of Health Canada should be gutted, and it should rely on data provided to it by the for-profit pharmaceutical industry,” he says. “That was a terrible decision.”

As for how restrictive the federal government’s medical marijuana regulations have become, Schafer fails to see the logic.

In theory CBD could be available “so families have to uproot themselves,” he says, “and move to Colorado in a desperate attempt to save their kids. That’s not acceptable, and why Health Canada has adopted such an inhumane policy for parents is difficult to understand.”

Although there are no federally regulated clinical trials involving medical marijuana, and Health Canada and the Canadian Medical Association don’t currently encourage doctors to prescribe the untested drug, CBD and medical marijuana have been used with success to treat epilepsy, autism, Parkinson’s disease, Crohn’s disease, lupus, fibromyalgia and a host of other disorders including Tourette syndrome.

Talk to the mother of an epileptic child and you’ll understand that medical marijuana is a lifesaver.