NOW MagazineNewsPounding the pavement at Yonge-Dundas

Pounding the pavement at Yonge-Dundas

The antidote to religiosity is certainly not censorship, but as Toronto continues to develop a unique image, citizens ought to think about what they want presented at the city's most trafficked corner 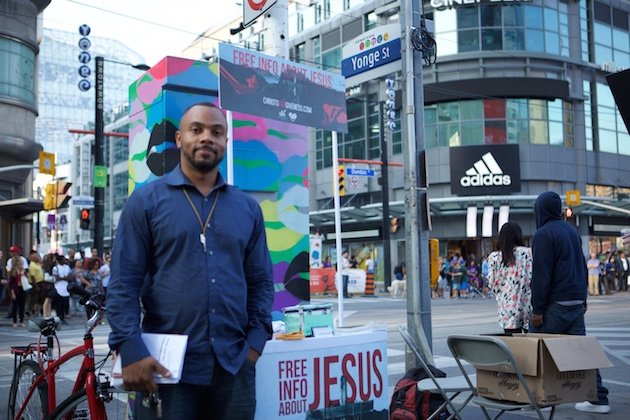 Trafalgar Square in London has its social activists, the Montmartre district in Paris its impressionist painters (and pickpockets) and Times Square in New York City its professional buskers (and highly unprofessional ones – I mean you, anti-Semitic Elmo).

What should Toronto highlight at its most known public forum?

If you ask David Lynn, the southwest corner of Yonge and Dundas is a battlefield where a war of philosophies is being waged.

“Whoever wins will dominate the laws,” he tells me one recent morning. With the stakes seemingly so high, it’s no wonder Lynn spends much of his time promoting Evangelical Christianity on the corner. He’s been a fixture here for five years.

On any given weekday, proselytizers share the pavement with hawkers of black history pamphlets and erhu players, alongside homeless people scanning the ground for cigarette butts or asking passersby for spare change.

The battle for hearts and minds doesn’t usually get under way until 4 pm, when the afternoon rush nears its peak.

By the Gospel stand, a woman working a microphone is hollering, “I revuke you in the name of Jesus! I -revuke you!” I assume she means -“rebuke.”

Her adversary in this exchange, another regular on the corner, fires back, “I’m explaining the truth to you!”

Soon Lynn steps in, calming the man by gently patting his shoulder. “Let’s be civil man, come on,” Lynn says. “What’s up?”

The man tells Lynn, “Hinduism is the only answer. You’ll find that out one day. You’ll see.”

After watching Lynn getting praised, castigated and ignored, I ask if the day was par for the course. It was, though compared to the time he was spat on and the time he was arrested for amplified busking, it was relatively calm.

A quick scan of the crowd at Yonge and Dundas suggests that it doesn’t take much for tempers to flare.

A few days prior to this visit, I overhear a father remark to his daughter at the corner, “Those idiots shouldn’t be allowed out here.” A similar thread can be found on various discussion boards and social networking sites online.

On yelp.ca, Jenny T. comments: “It’s noise pollution. I would like to see some real talent take over this intersection and really showcase Toronto.”

In reply, Calvin S. writes: “Would you rather be startled by him [the Jesus guy, whose real name is Sarco] or dominated by the Islam signs across the street?”

While we might not hear constant complaints about the religious at Yonge and Dundas, such condemnations are just beneath the surface and in the minds of many.

I get the point: the preaching is obnoxious. The Centre for Inquiry Canada (CFIC), a self-described freethinking charity that aims to promote a skeptical, secular humanistic community, seems to think so, too.

“As regards the extent of proselytism in public discourse,” writes national executive director Eric Adriaans in an email to me, “CFIC is much more concerned with proselytism in publicly funded schools than at a venue such as Yonge-Dundas. Vulnerable and captive audiences such as students, seniors receiving extended care health services or prison inmates should not face systemic proselytism.”

Adriaans brings up the Living Without Religion support group that CFIC sponsors, as well as a host of other events aimed at educating the public regarding science, secularism and humanism.

CFIC used to have its own booth at the intersection but has not been back in recent years. That’s not because of “any type of aversion to the area,” says Adriaans, but rather “a matter of targeting venues for our activities.”

In short, CFIC feels that time could be better spent in other places.

I ask Lynn if his time proselytizing could be better spent elsewhere. “Well, we do charity work as well, but no, this is the spot. We don’t want to be pushed around any more.”

Lynn is referring to the time police showed up on Labour Day last year and arrested him under a city bylaw that prohibits amplified sound in a public space without a permit. The arrest was caught on a cellphone camera by one of his adherents.

In response, Lynn held a Stop Bullying Christians rally and started a website with the same name, taking his inspiration from stateside street preachers who’ve allegedly been roused from public space.

Lynn’s case caught the attention  of former Sun News Network host Ezra Levant, who featured Lynn in a spot on his show and helped raise funds from viewers for a lawyer. The charge against Lynn was withdrawn in April because he’d been charged under the wrong busking law. Lynn took to strapping a GoPro camera to his chest to do his preaching for some time after that just in case the police got any funny ideas.

“It’s weird, but so much diversity in Canada has led to intolerance,” he says. “It seems like we can’t be ourselves any more. I just want people to be themselves.”

Unless they’re gay, of course. Although Lynn is adamant about not being homophobic, he preaches an awful lot of guff about gay people, enough to catch the attention of World Pride participants last year. Is he out to combat intolerance, promote intolerance or convert non-believers?

“One hundred per cent, I’m here to evangelize!”

The antidote to religiosity at Yonge and Dundas is certainly not censorship, but as Toronto continues to develop a unique image, citizens ought to think about what they want presented in the city’s most trafficked public space.

Says Adriaans: “Commitment to diversity must include tolerance of public expressions of different perspectives…. The real challenge for Canadians is to continue to foster an educated, tolerant and supportive community that shows equal value to all perspectives.”

Just make sure to claim your space before the “battle” begins. Any time before noon should work.