Can the grassroots trust the Wynne government after missing targets? 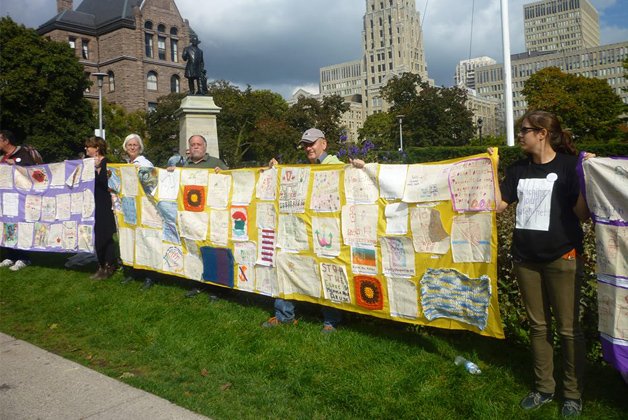 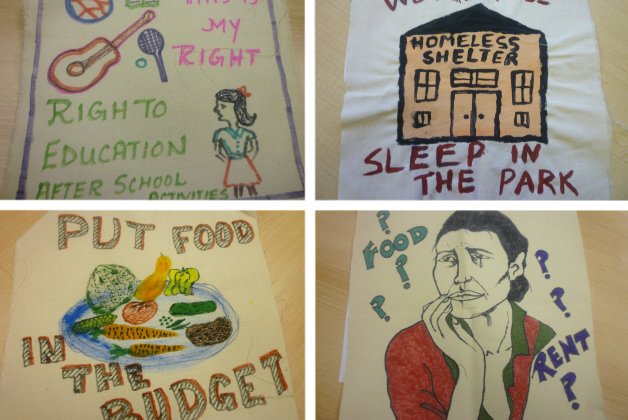 It was an afternoon of tactical contrasts. On a bright, crisp autumn day last Thursday, October 17, two protests with distinctly different communications strategies targeted the same government failure on poverty.

At noon, OCAP, along with reps from OPSEU and CUPE and members of Put Food in the Budget, headed down to the minister of finance’s office at College and University, where they chanted “Raise the rates” and made fiery speeches against Liberal austerity preoccupations.

An hour later, a more subdued expression of dismay about the 12.9 per cent of Ontarians living in poverty took place in Queen’s Park. There, Stitching Our Safety Net, a coalition of 30 groups from Social Planning Toronto to St. Stephen’s Community House and the Christian Resource Centre, displayed a huge quilt illustrating in pictures and text the unravelling of social services and income support in Ontario.

The styles surely differed, but the message was pretty much the same: raise social assistance rates significantly and implement a $14-an-hour minimum wage.

Nonetheless, centrifugal forces have fractured the anti-poverty constituency as participants spar over what to put on the A list – a housing subsidy, a bigger food allowance, income questions and/or disability issues. And there’s definitely not a lot of togetherness over what approach to take to the Liberal government.

“It is not very often that all the groups come together and fight together,” says Naomi Berlyne, co-coordinator at Houselink and a Stitching Our Safety Net organizer, admitting that the movement is essentially splintered over differing priorities.

Then there’s the matter of how to deal with government consultations. OCAP’s John Clarke is very critical of the willingness of groups like the 25-in-5 Network (reduce poverty 25 per cent within five years) to participate in ongoing dialogue with the government.

The Liberals have certainly made it their game to set up task forces and feedback processes. Currently, the Minimum Wage Advisory Panel is seeking input by November 7. Consultations are also ongoing around the second phase of the province’s poverty reduction strategy – a process clouded by the failure to meet a five-year target set in 2008. The Liberals did not succeed in their much-heralded commitment to reduce by 25 per cent the number of Ontario children in poverty by 2013 – to shrink the number from 419,000 by 1o3,000.

Instead, only 47,000 children had their lives significantly improved, according to government stats, mostly through the Child Tax Benefit and an increase in the Ontario Child Tax Credit.

Clarke doesn’t see the point in participating in the Ministry of Community and Social Services’ new round of info-seeking on poverty.

“[The consultations] have tended to legitimize the government and foster this ongoing myth that sooner or later they are going to get around to doing something about the problem,” he says.

While social assistance rates have increased under the Liberals (in September new rules raised the amount recipients could earn without clawbacks and upped welfare for singles 3 per cent a month), Clarke points out that if rates are measured against inflation, people on benefits ($626 monthly for singles on welfare, $1,086 for those on ODSP) are actually poorer today than they were under Mike Harris. “People are considerably worse off because of the economic changes, and they are worse off because of deliberate, wilful government policy,” says Clarke.

But some think there’s more to be gained by encouraging the Liberals to be more courageous. Policy expert John Stapleton from the 25-in-5 Network wants to “cut a bit of slack” for the government. He believes it was essentially the recession that got in the way of poverty reduction.

What we have at Queen’s Park, he says, is a welcome relief from the dictates of the right-wing governments at the national and city level. “The bureaucracy is out there holding all sorts of [public meetings]. And [the minister of community and social services] Ted McMeekin has an advisory group on social assistance. This is something other governments have not done. You have to go back to the late 80s to see this much consultation.”

At the Income Security Advocacy Centre legal clinic (a member of the 25-in-5 Network), Jennefer Laidley thinks even the 47,000 number “shows some progress” – though she cautions that those children are probably from families formerly “on the edge or a bit below the poverty line” and not the most destitute.

What even this limited success tells us, she says, is that “when a government focuses on a particular issue and makes the right public policy choices and the right investments, it can have an impact.”

More scathing is Marvyn Novick, a former dean of social work at Ryerson University and a member of Poverty Free Ontario. He says that if the Ontario Liberals were serious they would be investing substantial resources in taking the province from a two-digit poverty rate jurisdiction to a single-digit one, as recommended by the United Nations. In Norway, for example, the rate is 5 per cent.

“We are not going below 10 per cent, so what happens is we get marginal improvements proclaimed as triumphs. But when you go from 13.3 down to 12.9 [as Ontario has], it is not an achievement,” he says.

Meanwhile, poverty experts await further changes recommended in last year’s social assistance review. One prevailing fear surrounds the proposal to merge the Ontario Disability Support Program with welfare. At the Ministry of Community and Social Services, Charlotte Wilkinson maintains there are no plans to amalgamate the two despite “significant speculation and even misinformation.”

12.9% Ontarians living below the poverty line

$626 What single people on welfare live on monthly

25% Food bank users in downtown T.O. with a university education or above

21% Toronto youths who are unemployed