Ontario Premier Kathleen Wynne has grave concern regarding Bill C-36, the federal Protection Of Communities And Exploited Persons Act, which. 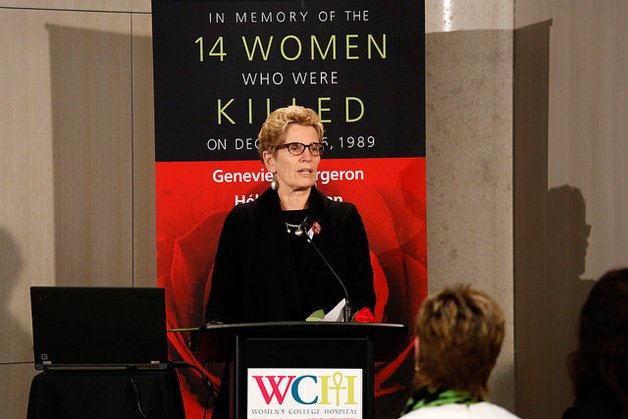 Ontario Premier Kathleen Wynne has grave concern regarding Bill C-36, the federal Protection Of Communities And Exploited Persons Act, which came into effect on December 6.

“I am not an expert, and I am not a lawyer, but as Premier of this province, I am concerned that this legislation (now the law of the land) will not make sex workers safer,” she said in a statement Sunday. (The full release is below.)

The premier has asked Madeleine Meilleur, Ontario’s attorney general, to advise on the law’s constitutionality and what steps might be taken if its compliance with the Charter is called into question. She says that the law will, however, be enforced in the meantime.

For weeks, sex workers and allies have been writing letters, tweeting and phoning, pleading with Wynne to act by referring the bill to the Ontario Court of Appeal and to instruct Crown prosecutors not to enforce it until its constitutionality can be determined power granted to her through the province’s Courts Of Justice Act.

The list of allies is long, including more than 100 national advocacy groups, unions, members of academic, political and legal organizations, Aboriginal elders and elected officials. And it continues to grow.

Most recently, 25 Toronto city councillors signed a letter that got the attention of many at Queens Park. Councillor Kristyn Wong-Tam, who wrote the letter, says every single resident in the city of Toronto deserves equal treatment under the law.

Bill C-36 replaces the previous prostitution-related laws that the Supreme Court of Canada struck down in 2013 in the landmark case Bedford v. Canada.

Three sex workers challenged the constitutionality of those laws, arguing that they put sex workers lives at risk by preventing them from working out of their homes and putting in place certain safety measures to screen clients, like hiring security guards. The court agreed to strike down the laws but suspended their ruling for a year in order to give the federal government an opportunity to adopt new legislation if they wished.

Yesterday, on December 6, after months of hearings and public debate, The Protection of Communities and Exploited Persons Act came into effect.

When the Supreme Court of Canada struck down three provisions of the Criminal Code, they found that each of the impugned laws placed sex workers unnecessarily at risk in a way that violated their rights to safety and security under the Charter.

As I have said before, my priority in this debate is to ensure that our laws and institutions enhance the safety of those who are vulnerable in this case, sex workers: a class of (mostly) women, who are disproportionately the victims of sexual and physical violence. So I believe that there is merit in considering whether the Conservative government’s new legislation meets that test.

I have listened to the debate that has taken place over the last year, and particularly since the introduction of Bill C-36. And I am left with grave concern that the so-called Protection of Communities and Exploited Persons Act will protect neither exploited persons nor communities.

I am not an expert, and I am not a lawyer, but as Premier of this province, I am concerned that this legislation (now the law of the land) will not make sex workers safer.

The legislation was duly passed through a democratic process. The Attorney General of Ontario is bound to enforce the Criminal Code. And she will.

But I have also asked the Attorney General to advise me on the constitutional validity of this legislation, in light of the Supreme Court’s decision in the Bedford case, and our options as a government in the event that the legislation’s constitutionality is in question.

We must enforce duly enacted legislation, but I believe that we must also take steps to satisfy ourselves that, in doing so, we are upholding the constitution and the Charter.