BETROFFENHEIT created by Crystal Pite and Jonathon Young. Presented by Canadian Stage and Panamania at the Bluma Appel (27 Front. 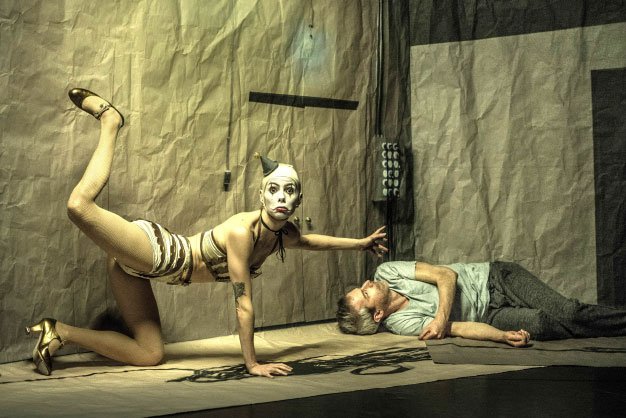 Choreographer Crystal Pite knows how to express complex ideas and emotions in movement.

“Betroffenheit” is a German expression without an English equivalent. It describes a sense of confused paralysis in the aftermath of disaster. Writer/performer Jonathon Young and choreographer Crystal Pite are using it as the title of an unusual dance-theatre work getting its world premiere as part of Panamania.

The work’s point of origin was the death of Young’s 14-year-old daughter Azra, who died in a cabin fire along with two cousins in 2009.

Understandably, Young has been processing the horrific event and its aftermath for years. He’s also spent time writing and wondering if it would be possible to translate the reverberations of this very personal disaster into theatre. In 2013, he turned to Pite, an expert in the physical communication of complex ideas and emotions.

“I came to her with some ideas and a few pages of text,” he tells me from the Banff Centre, where the pair are putting finishing touches on their evening-length dance-theatre hybrid.

“We started talking about how to stage a mind that is traumatized or sick with betroffenheit, a mind disordered by post-traumatic stress.”

For both Pite and Young, the challenge became how to fuse disciplines into a holistic theatre experience. Some sections are pure dance, while in others Young speaks his text as the five dancers of Kidd Pivot embody and extrapolate from that text.

“One of the key ingredients of the show is that tension between what can and cannot be expressed,” says Pite in a separate interview.

“Jonathon’s character is very much concerned with language – but we see it fail him, and he must find an alternate means of coming to terms.”

Young says this is one of his favourite aspects of the show.

“Watching Crystal’s choreography to the sound of the spoken word and how the physicality can then fragment or split off from that, we see the echo of a passage of text in the body. So we’re getting all these great resonances from a statement or a series of statements. It’s thrilling. She’s been a co-writer, even if that writing is purely physical”.

While its originating material is the stuff of nightmares, Betroffenheit promises to be more about survival and transcendence than failure and loss.

Both artists seem buoyed and excited by what they’ve created and the process of making it. There have even been some laughs along the way.

“We’ve pushed things to the extreme,” says Young. “It’s astonishing the level of absurdity that human suffering can attain. So there is a great deal of humour in the piece. Thankfully, that’s balanced out the fact that we’ve been terrified, and my many moments questioning, ‘Is this what I should be doing?'”

For Young the creative process has also been a healing one.

“We’ve been determined to make this as universal as we can,” he says. “Funnelling my experience into a piece of theatre performance has moved it outside of me. We’ve gone from something that was sort of small and dark and expanded it outward so it’s big and bright.”

“It’s been a really whole experience,” adds Pite. “And I think what the show arrives at is that there are no easy answers. The process of survival is ongoing. It continues and it’s work and it’s a lifelong process, but it can be quite a beautiful process as well as a difficult one.”