Theres lots to look forward to in next years Canadian Opera Company (COC) shows, filled with Canadian talent both onstage. 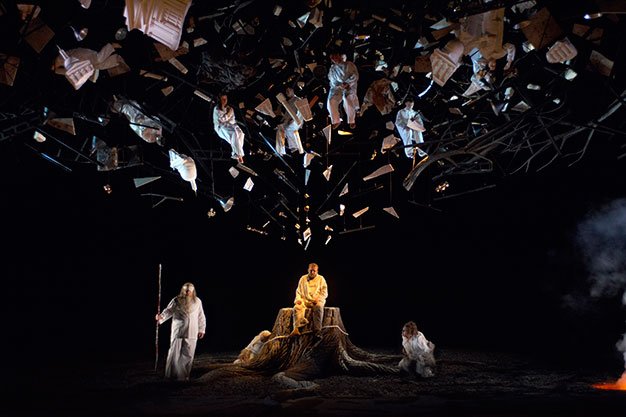 Theres lots to look forward to in next years Canadian Opera Company (COC) shows, filled with Canadian talent both onstage and behind the scenes.

One of the most exciting pieces of news in the announcement Wednesday (January 14) is that the production of Bizets Carmen, the revival of a 2010 COC show, will be directed by Joel Ivany. Hes done splendid work with his own company, Against The Grain, most recently with his adaptation/direction of Mozarts Don Giovanni.

Ivany, who here makes his COC mainstage debut, has already directed this production of Carmen in Vancouver, where it got positive reviews. Carmen, one of operas most frequently staged works, here gets an update and a geographic move its set in 1940s Latin America. Running April 12 to May 15, 2016, this version features Anita Rachvelishvili and Clementine Margain alternating in the title role. Also in the production are Canadian singers David Pomeroy and Simone Osborne.

The season opens with another popular work, Verdis La Traviata, directed by Arin Arbus. Ekaterina Siurina and Joyce El-Khoury share the role of Violetta, a courtesan who falls in love with an innocent young man. Among those joining the two sopranos are Andrew Haji, James Westman and a COC favourite, Quinn Kelsey (October 8 to November 6).

The fall season includes a triple bill of short works, two rarely staged baroque pieces and the world premiere of a tale audiences will know in an entirely different context. The baroque works, both by Monteverdi, are Lamento dArianna and Il Combattimento Di Tancredi E Clorinda. The first is a solo piece in with Ariadne bemoans her abandonment on the island of Naxos by the hero Theseus Richard Strauss also used the tale in Ariadne Auf Naxos. The second has the Christian knight Tancred and the woman he loves, the Saracen warrior maiden Clorinda, unknowingly going head to head in mortal combat.

The premiere is Barbara Monk Feldmans Pyramus And Thisbe, another classic tale of tragic love thats best remembered as a parody at the end of Shakespeares A Midsummer Nights Dream. Fine actor/singer Krisztina Szabo has a full evening, playing Thisbe, Arianna and Clorinda also featured are Phillip Addis and Owen McCausland, with Christopher Alden directing and Johannes Debus conducting (October 20 to November 7).

The winter operatic pairing begins with a revival of Wagners Siegfried, the third opera in the four-part Ring cycle, directed by Francois Girard and conducted by Debus, in Michael Levines extraordinary design, with Stefan Vinke in the title role and Christine Goerke as Brunnhilde. Beginning later this month, the soprano sings the role in the COCs remount of Die Walkure, the cycles second opera (January 23 to February 14, 2016).

Siegfried runs in rep with Mozarts The Marriage Of Figaro in a production created by the Salzburg Festival for the 250th anniversary of Mozarts birth. Director Claus Guth draws on the works of Ingmar Bergman, Ibsen and Strindberg for his staging Debus leads the COC Orchestra. Expect a number of fine performances, including those of Jane Archibald as Susanna and Erin Wall and Russell Braun as the Countess and the Count (February 4 to 27, 2016, with a performance by members of the COC Ensemble Studio on February 22).

Joining Carmen in the spring is a rarity: Rossinis bel canto opera Maometto II, full of vocal fireworks and starring bass-baritone Luca Pisaroni as the Turkish sultan who aimed to conquer the Holy Roman Empire. David Alden directs the recently rediscovered Naples version of the score, which he staged in 2012 in Santa Fe. Harry Bickett conducts (April 29 to May 14, 2016).

The COC also announced the commission of a new opera by Canadian Ana Sokolovic for the companys 2019-2020 season. La Reine-Garcon is based on the play by Michel Marc Bouchard, which premiered in English as Christina, The Girl King at Stratford this past summer. Its based on the character of 17th-century Christina of Sweden, who abdicated her throne. Sokolovic previously composed several pieces for Queen of Puddings Music Theatre, including Svadba-Wedding.

Already announced for the 2018-2019 COC season is Hadrian, composed by Rufus Wainwright to a libretto by Daniel MacIvor.