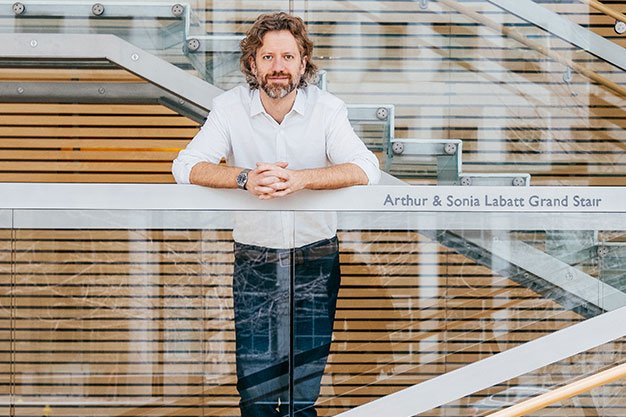 In opera, supernumeraries are stage extras: they generally hold spears, populate a village, help form a crowd when one is needed.

Back in 2005, Joel Ivany was a super in the Canadian Opera Company’s production of Carmen. Now he’s directing it.

“There’s a production picture and you can see me clearly in the Toreador Song scene,” laughs the scruffy and soft-spoken director in a board room at the COC’s Front Street offices.

At the time, Ivany had just graduated from music school and was thinking of pursuing an MFA in directing. People suggested that with his music background, he should consider opera. And a friend, an assistant director on that production of Carmen, told him that as a super he could see what it was like.

“I loved standing in the wings, watching act four when the tenor finishes and runs off all sweaty and intense. I’d study the stage manager and see everything from a super’s perspective. And I thought, ‘I want to do more of this.'”

He did. He went to U of T’s opera school and eventually found work in Toronto and around the world, including assisting on some COC productions. In 2011, he helped found Against the Grain Theatre, whose innovative, low-budget takes on familiar and unfamiliar works – La Boheme set in an actual bar, The Messiah with bare feet and sheep noises – have shaken up the normally staid classical music world.

With his mainstage debut directing Bizet’s sensual tragedy, Ivany wants to appeal to both seasoned operagoers and newcomers.

“Carmen is hard to do wrong, but it’s also hard to get just right,” he says. “A lot of the people involved in this production are new. Many of the singers are making role debuts. We’re trying to make it as clear and as entertaining as possible, and also exciting. Some people might not know how it ends.”

Although the sets date back to that 2005 production, he and set/costume design coordinator Camellia Koo have tweaked it to create, as he puts it, “a Carmen 2.0.” In preparation, Ivany sat in every section of the 2,000-seat hall to see what the stage picture would be like.

“It was beautiful, and much of it wasn’t even planned. The audience reacted and took it somewhere else. We don’t want to force it, but if it happens here, that would be fantastic. It created a feeling of unity.”

The fact that Ivany’s married to a singer, soprano Miriam Khalil, has given him a perspective that many directors lack.

“I’ve seen directors in documentaries who barely talk to the singers they think the opera is all about their concept. For me, singers are people. If you show them respect, you’ll get it back.”

And what about the supernumeraries?

“They’re as important as anyone else,” he says. “Whether you’re in the chorus, a super or in the orchestra, you’re all working together to create something special.”