EUNOIA choreographed and directed by Denise Fujiwara, from the poem by Christian Bok, with Sylvie Bouchard, Claudia Moore, Lucy Rupert,. 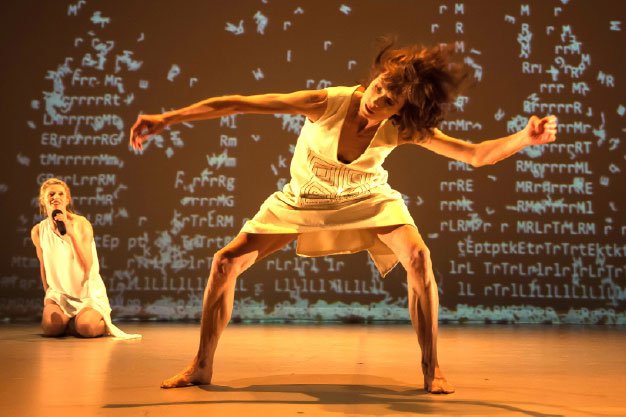 Denise Fujiwara was on the brink of giving it all up.

Last year, the day before the premiere of her ambitious piece EUNOIA – which took five years to put together – the choreographer told her husband that if this show didn’t work, she might be finished with dance.

She needn’t have worried.

The Toronto run sold out, and critics raved. (It made my list of the top five dance shows in 2014.)

Fujiwara and her dancers have just finished a four-city tour that took them from Halifax to Whitehorse, with standing ovations at each performance. Now they’re returning to T.O. for a hometown victory lap.

The piece is based on experimental poet Christian Bok’s book of the same name, in which each chapter features only words with the same vowel. (The title is the shortest word in the English language that uses all five vowels.)

Fujiwara read it shortly after it won the Griffin Poetry Prize and had it in mind when she was considering her next full-length work.

“I wanted to use text as a score, in the way many choreographers use music,” she explains. “I needed something really dense. And I remembered Eunoia. I found Christian’s email and asked him if we could use it to make a dance, and he said, ‘Sure.'”

The result – playful, dramatic and that rare thing in dance, original – has caught on with all-ages dance and non-dance lovers, particularly word geeks who like crosswords.

Fujiwara knew from the start that she didn’t want to do a literal adaptation of the poems.

“That would have been the kiss of death,” she says, laughing. “But the other extreme would be using text and then ignoring it, offering up this abstract, opaque dance without any connections.”

What she found over five years of workshops, research and development was a sweet spot between abstraction and literalness.

One brilliant decision was to put the same constraints on her choreography and the show’s design that Bok uses in his poetry.

For example, in the sequence on the letter A, dancers initiate movements from body parts spelled only with the vowel A: hand, arm, jaw, calf. Similarly, Phil Strong’s music design draws on sounds from the harp, maraca, tabla.

Fujiwara was determined to get away from dance conventions.

“I wanted to avoid unison movement, repetition or partnering,” she says. “You see those at any dance performance. But in the chapter on the letter E, we could do jetes, which, of course, are ballet moves. And in the chapter on A, we could use salsa and kathak.”

The piece is lots of fun – for the dancers and for audiences.

“When I would describe the premise of the work, people’s eyes would glaze over,” Fujiwara says. “They thought it would be academic, dry, conceptual and elitist. But it’s very engaging. We play games. The whole show is like a four-dimensional puzzle. And I think that’s what people like. They get to actively participate in it.”