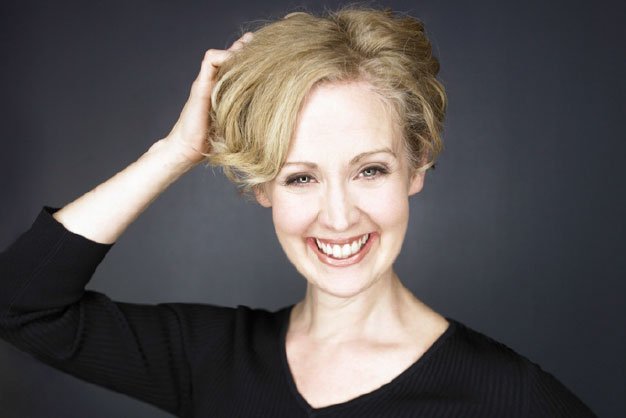 Lisa Horner says Big Edie and Little Edie were eccentrics at a time when such people weren't appreciated.

Scions of a well-to-do family – Jackie Kennedy Onassis was a close relative – the pair, dubbed “Big Edie” and “Little Edie,” had fallen socially and economically by the time of the documentary. The Maysles brothers’ film shows them living with cats and raccoons in their decaying East Hampton mansion. Years earlier, Little Edie had returned home from Manhattan, where she’d hoped to become a performer, to care for her mother.

A 2006 Tony-winning musical by Doug Wright, Scott Frankel and Michael Korie uses the film as the basis for its second act, set in 1973. A fictionalized first act takes place during the family’s heyday in 1941.

In Acting Up Stage’s version of the musical, Lisa Horner has to do the heavy lifting of playing elegant mother Edith in the first half and then her daughter, Edie, dressed in peculiar fashion creations, in the second.

“What struck me most when I first saw the documentary years ago was how sad these two women were,” Horner recalls. “Crazy, hoarders and other words came to mind. But that’s not how I view them now. They were eccentrics in a time when such people weren’t appreciated.

“They were, in fact, innate entertainers, people who wanted to be professionals, which was totally unacceptable to their high-born family.”

The first act is more traditional in its musical framework, both in terms of its period tunes and structure, while the second uses the documentary for some of its dialogue and lyrics.

“That second act, in contrast to what precedes it, is modern and quirky, with gorgeous melodies that bring tears to my eyes,” says the actor during a rehearsal break.

Horner, whose credits include The Wizard Of Oz, The Wild Party and Les Miserables, has done lots of research on the Beales, starting with the documentary and other films and then devouring what others had to say about them.

“Watching and reading about them together, it’s hard to know what’s real and what’s not, what’s been felt for years and what’s born in the emotions of the moment. Little Edie had so many wishes and dreams that it’s hard to see what her true self was.

“In the documentary, she’s always aware of playing to the camera, of starring in a movie. She went to all the documentary openings around the country as if she were the central attraction in a Hollywood film. She was so proud of the film, for it was her big chance to show off the talent she wanted to share with audiences.”

In both acts we see Big Edie, a large personality, trying to control Little Edie’s life, both in terms of the younger woman’s romance and career.

“But much of what I read showed them as kind, wonderful, generous women, so well raised and bred, so friendly and loving.

“Still, the documentary and musical frequently show them at odds. Sometimes you’re way ruder to family members than you are to guests or strangers. I think they stopped seeing each other as people. In the second act, Big Edie is nasty to her daughter, but Little Edie no longer hears those put-downs.”

Each woman was imprisoned, Edith by her dependence on the money of her father and philandering husband, Edie by the life she was born into that kept her from a stage career.

“There’s a strength to the mother that I’m not sure the daughter possessed. Edie was often like a feather on the breeze.

“Even so, both understood the saying that Little Edie disparages in the 70s: ‘The hallmark of aristocracy is responsibility.’ When her mother needed her, she was pulled home by her own heart.”