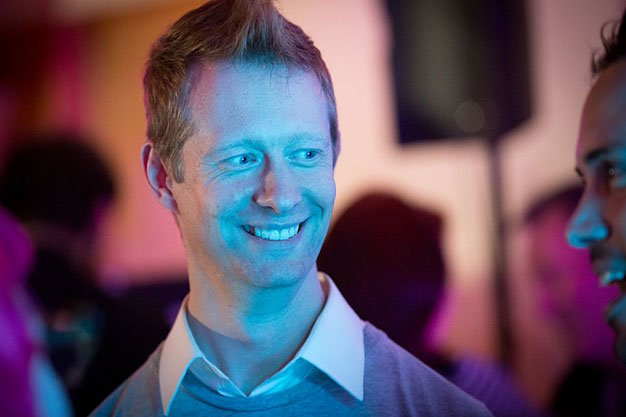 Eric Boyd, one of the event's directors and founder of Sensebridge, at the Toronto Mini Maker Faire launch party

If you approach Loretta Faveri at this weekend’s Toronto Mini Maker Faire, she can transform your tissue and tendons into rhythm and melody. She doesn’t need witchcraft to liven up your limbs – instead, she combines art and technology to create SoMo (short for “sound and movement”), wearable technology that analyses body movement and produces musical outputs, completely revolutionizing the traditional music-dance relationship.

Faveri began SoMo as a thesis project at OCAD, eventually coupling with programmers at Hacklab.TO to bring the project to life. This combination of art, technology and collaboration is the perfect representation of the maker movement, blending DIY philosophy with open source knowledge sharing.

The first Maker Faire– dubbed “the greatest show (and tell) on earth”– started in San Francisco in 2006 as the brainchild of Make Media. Since then, it has expanded internationally in the form of Mini Faires, independently run events akin to TedX talks. The Faires are opportunities for makers to show off their designs, empower attendees through workshops and help spread the belief that if you can think it, you can build it. In 2013, 98 of these Faires cropped up around the world, showing that this is truly a global movement.

“The idea is: you’ve got something you’ve dreamed about or you’ve got some problem in your life and you’re going to solve it using the resources you have at hand,” says Eric Boyd, one of the event’s directors.

The Toronto Mini Maker Faire has been produced off-and-on since 2011 and has attracted its share of makers. This year, Boyd says attendees can expect to smell the soldering of LED lights, see rockets rip through the air and handle printed 3D objects – all of which the general public can build, make and design themselves.

Despite its diminutive name, this year’s Faire is slated to be anything but: upwards of 10,000 participants, many families, are expected to cross the threshold of the Toronto Reference Library to attend this free event, in addition to the hundreds of Makers who will be sharing their wares. Its location at the Reference Library is not only fitting for an event based in knowledge dissemination, but also represents how the maker philosophy is becoming increasingly ingrained in the city’s identity. From the affordable Toronto Tool Library to the egalitarian Ladies Learning Code, Toronto is becoming a city of thinkers, doers and sharers.

“It is through events such as the Maker Faire that we see how Toronto is becoming a more innovative city,” says Robert Luke via email, Vice President of Research and Innovation at George Brown College. George Brown is one of the Faire’s key sponsors and Luke sees the maker movement as something that will save the Canadian economy. Being primarily resource-based, he says we need to embrace and excel in a know-how economy if we are to stay relevant.

“In a world where manufacturing is increasingly offshored, we have come to see that this puts our own capability as a country to thrive at risk,” Luke writes.

A 2013 report from KPMG shows that Canada has a relatively small portion of the global manufacturing market, despite employing one out of every ten working Canadians. While Luke admits that manufacturing has taken a hit lately, he thinks encouraging a DIY philosophy will position the country to be price-setters instead of price-takers.

For Lisa Carrie Goldberg, the maker movement is a chance to demonstrate the diversity that is oft touted as the city’s biggest strength. She believes the Faire is a natural extension of this manifest.

“Why wouldn’t an event featuring [Toronto’s] creativity be just as diverse?” she asks, referring to the plethora of makers who will be attending the Faire, representing the worlds of electronics, coding, science and art.

Goldberg blends chemistry and craft at Action Potential Lab, a learning centre that helps kids and adults merge both halves of the brain by using science to create art. A maker who will be demonstrating at the Faire, Goldberg says she’ll be displaying a “science and art imaginarium,” playing off the idea of science as magic.

She also thinks this helps put makers on par with other industries: while they have their conferences in Vegas, makers have their Faires – slightly more nerdy, sure, but just as legitimate.

“It’s a great way to see your friends and colleagues and…see in a microcosmic way what they’re all about,” she says.

So, what does Goldberg think you’ll discover if you peer into this microcosm? Basically anything.

“Whatever you’re into, you can find it,” she says.