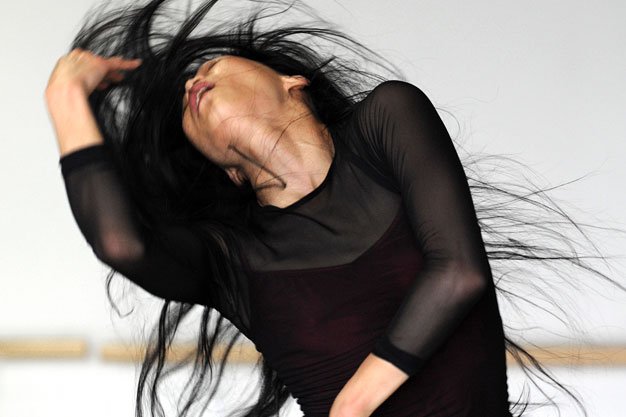 Dancer/choreographer Andrea Nann has always believed in the collaborative nature of dance. “We get into a studio and right away we make things with other people,” she points out. “There is very little that’s done in isolation.”

That spirit finds a voice in the activities of Nann’s company, Dreamwalker Dance, celebrating its 10th birthday this year, and in the annual Whole Shebang show that brings dance, music, visual and literary artists together for an evening-length mosaic of performance.

At a bakeshop near her home in Bloorcourt, Nann and I chat about the evolution of the wildly successful Shebang since its inception in 2004. The initial events featured talents like poets Michael Ondaatje and Souvankham Thammavongsa and singer/songwriters Jason Collett, Sarah Harmer, Andrew Cash and the Skydiggers’ Andy Maize (who is also Nann’s partner) sharing the stage with Nann and other dancers, but not necessarily at the same time.

“I was exploring how I could place the works side by side or layer them so their distinctions remained and yet they became part of another whole,” says Nann.

She explains that more recent editions have increasingly blurred the lines between artistic voices and disciplines, especially since co-creator Helen Yung started conceiving interstitial material and thematic frameworks for the event in 2011. The Shebang still invites diverse artists to the party, but she’s finding that they relate to each other – and the audience – in more fluid ways.

“One of the things that’s changed is this idea of a boundary-less world,” notes Nann. “That’s impacted the arts scene, where we’ve seen much more of a merging of forms or the creation of new forms, with different types of people coming together, and it’s beautiful.”

This year, Nann’s exercise in collective creation is a multidisciplinary show called Taken By Night. It’s a fully immersive experiential proposition that involves collaborators from past Shebangs riffing on the idea of night. The company is making the entire 918 Bathurst building (a former Buddhist meditation centre) its creative playground in order to explore the seductive concept.

“No matter where you are in the world, no matter what your experience or background, we all have a relationship with the cycle of day and night,” Nann explains. “To me, that was the common vessel we could all climb in, and from there go on this journey through the hours of the night.”

Indeed, a part of the show takes the entire audience on a nighttime stroll through the Ontario wilderness as interpreted by Yung and artist Tom Kuo.

Other works on the program – open for deeper exploration in a gallery setting for an hour prior to the performance – seek to involve audience members in ideas about connection and synchronicity. Projection artist Elysha Poirier’s 88 Constellations uses sensors sensitive to light and solid matter and translates the data triggered by people passing by a screen into projections of constellations

“These gallery experiences introduce a number of concepts that then become components of the show,” says Nann, “especially as they relate to the role of the audience and how much their presence affects and is affected by the work.”

That interaction is of fundamental importance to Nann and, just as much as collaboration, fuels her passion for performance. “Every body is a dance body, and every body has that desire to connect and to relate. That’s what dance is.”