NowMagazineNewsPride Toronto has a prison problem

Pride Toronto has a prison problem

Black Lives Matter stopped Torontos Pride parade partly to draw attention to the contentious relationship between the Black community and. 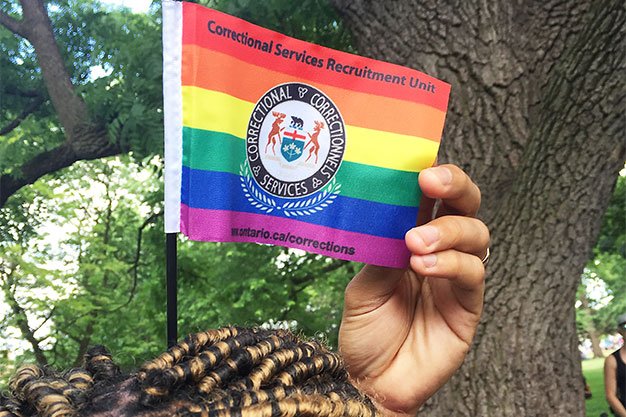 Correctional services' attitude toward consensual gay sex in prison is different from the one promoted at the Duke March July 2.

But another set of uniformed participants at the parade went unnoticed in the uproar. Their institutions policies also discriminate against people of colour and queers in a systemic way.

Ministry of Community Safety and Correctional Services (MCSCS) handed out rainbow flags from a booth during Prides Dyke March on July 2. The flags bore MCSCSs emblem in what looked like an attempt to put a rainbow gloss on the prejudice inherent in the agencys relationship with those incarcerated in this countrys prisons.

As the Office of the Correctional Investigator noted in its report earlier this year, people of colour are drastically over-represented in our prisons. The Black inmate population has grown by 69 per cent and the Indigenous inmate population by about 50 per cent over the last decade.

Furthermore, people of colour are more often incarcerated in higher-security facilities and find it much harder both to cascade down through the system and to be awarded parole.

Correctional services in Canada can be lauded for its attempts at the federal level to be more inclusive in its hiring practices and its efforts to make the mostly white (over 80 per cent), mostly male (67 per cent) front-line staff better reflect the ethnicity of their wards.

However, federal policies regarding how LGBTQ2S prisoners are treated reflect quite a different attitude.

Sexual relations between prisoners remain forbidden, although youd find it hard to locate exactly where this policy is officially enshrined. Buggery was decriminalized in Canada in 1988 in part because of the gay rights movement. The prohibition against consensual sexual activity among prisoners is not written in the Corrections And Conditional Release Act (CCRA), nor does it appear in the Correctional Service Canada’s (CSC) internal Commissioners Directives.

Under the Standing Orders available only through the Access to Information Act, inmates who are caught in loving liaisons can be charged with a disciplinary offence since, according to CSC, such liaisons are likely to jeopardize the security of the penitentiary.

The CSC claims that it is difficult to distinguish between consensual sexual activity and rape and that the order prohibiting sexual contact among inmates is for the inmates protection.

The CSC fails to recognize the research, both empirical and anecdotal, showing that rape is a non-problem in Canadian prisons: sex offenders are not much tolerated among the prison population, and to commit an act of sexual assault against another inmate is considered a mortal sin. Prisoners dont like rapists, especially if one of their own is the victim.

Canadian corrections officials even stated in a Columbia University study on rape in prison that they did not believe that prisoner rape was a significant problem in their facilities.

Rape in Canadian jails is much less common than in the U.S., according to the Prisoners HIV/AIDS Support and Action Network (PASAN) because Canadian prisons are smaller, sentences are shorter, and sex offenders are kept segregated.

A 1994 CSC report, HIV/AIDS In Prisons, revealed infection rates of up to 2 per cent compared to 0.2 per cent in the general population. Internal CSC data shows that 4 per cent of releasees are infected today.

A panel of academics from McGill University concluded that the prohibition on inmate liaisons contributes to the risk of HIV/AIDS transmission, since participants fear discovery and do not have time to be safe and use condoms in their clandestine encounters.

PASAN says, The need to be furtive while engaging in sexual activity is more a source of disorder than the sex itself. The CSCs policy, it argues, contributes to the diseases transmission rather than preventing it.

As for the rainbow flags handed out at the Dyke March, it seems that while it takes one step forward in hiring practices, corrections in Canada is simultaneously entrenched in a bygone age when difference, diversity, ethnicity and queerness were criminalized.

In terms of its treatment of people of colour and queers alike, correctional services should not be allowed to hide behind Prides flag.

Chester Abbotsbury is the pseudonym of a former federal prisoner currently on day parole. He has written extensively about the experience of prison.

Updated Thursday July 21, 12:59 pm: An earlier version of this story erroneously stated that Correctional Service Canada was among the participants at Pride.