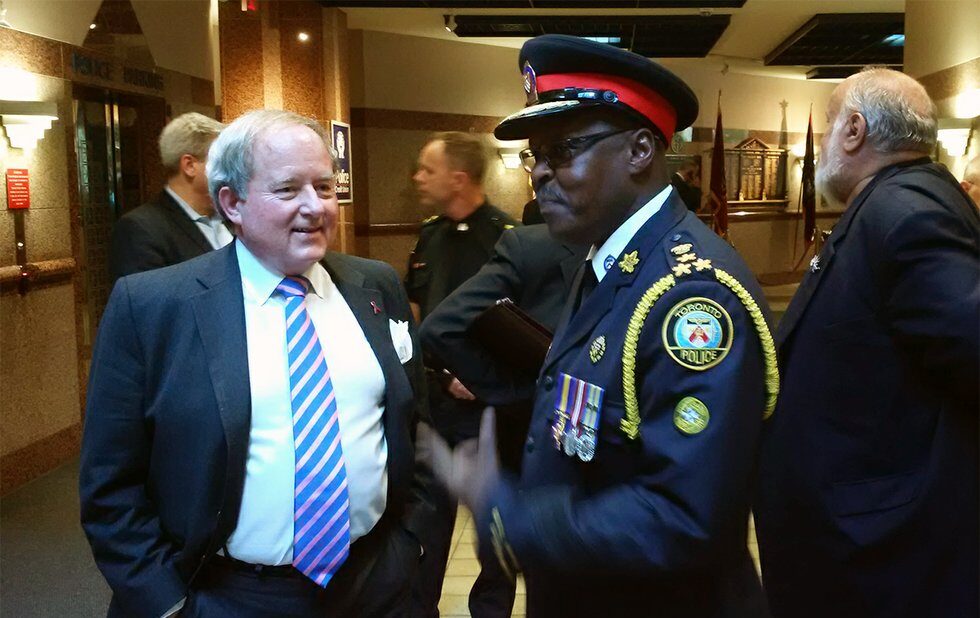 Toronto Police Services Board chair Andy Pringle has quietly stepped away from his role as a  key fundraiser for Conservative Party of Canada leadership candidate Kellie Leitch, who since September has campaigned on a xenophobic proposal to screen all immigrants, refugees and visitors to Canada for their ostensible compatibility with “Canadian values.”

In early October, a number of past and present police board members and other experts expressed serious concerns to NOW that Pringle’s support for Leitch could undermine public trust in the board’s ability to tackle crucial issues involving the policing of racialized communities — and that such actions could constitute a breach of the board members’ code of conduct.

Shortly after these reports, it turns out, Pringle pulled back from the campaign.

“Since your articles, I basically have said that if there’s gonna be concern about this, my first responsibility is to the job I’m doing at the Transformational Task Force of the police,” Pringle told NOW late last week. The task force, which he co-chairs with chief Mark Saunders, is set to report next month on a “modernization” of policing in Toronto, with an eye to reining in costs and adopting a more “community-centric approach.”

“So as long as I’m chair of the Transformational Task Force, I’m gonna be staying away from any form of partisan politics,” Pringle said, adding for clarity: “So not helping, not supporting anybody’s point of view, not helping any candidate, not raising money for anybody.”

“Andy Pringle has not been involved in any way on the campaign since early October,” the Leitch campaign confirmed in an email. “Thank you for your keen interest.”

In her first five months in the race, Leitch raised $450,421.56, more than any other candidate. Nearly a third of that came in September, following her introduction of the values-based screening proposal. Fundraising figures for the October-December period will be available early next year.

While emphasizing that his fundraising for Leitch was no different than his similar efforts for then-mayoral candidate John Tory and former Conservative MPs Joe Oliver and Jim Flaherty, Pringle said he concluded that “if it’s going to be a distraction from important work like the Transformational Task Force, I will disengage from it.”

But why the task force specifically, as opposed to the responsibilities of the police board more generally?

“Well, I think the Transformational Task Force is what I used as the example because it’s important work we’re engaged in now. But you can substitute one for the other, I’m sure.”

More recently, Pringle, who also chairs the Shaw Festival’s board of governors, faced a call to step down from his position there due to his involvement with Leitch.

Following her campaign’s attempt to ride the wave of Donald Trump’s victory in the American election, playwright Michael Healey called for Pringle to resign — or failing that, be ousted — from the festival’s board. (Healey has a play in Shaw’s 2017 season that examines Joe Clark’s brief 1979 run as prime minister of Canada and how his vein of Red Toryism was eventually supplanted by Stephen Harper’s aggressive neoconservatism. Graham Fox, a former chief of staff to Clark, is coincidentally among the prominent Conservatives who have recently abandoned Leitch.)

Pringle’s departure from the Leitch team became public after the Globe contacted him about Healey’s demand.

His term as Shaw chair wraps up in February, but in addition to the police board, Pringle will remain busy with RP Investment Advisors, the Canadian Foundation for AIDS Research, the Walrus Foundation, and selling his house.