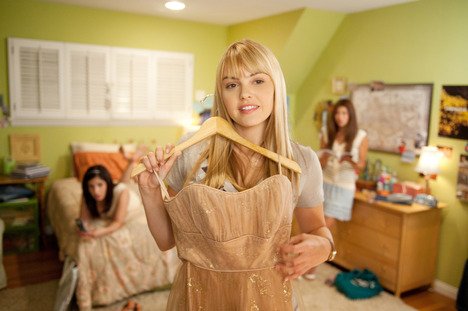 The high school prom has provided the climactic setting for many a teen romantic comedy, but in Disney’s sweet new movie it takes up the entire plot. Even if, like me, you’re not remotely in its target audience, I recommend not skipping this Prom.

A few weeks before the big night, perky school president and prom organizer Nova (Aimee Teegarden) has to rebuild the recently destroyed decorations – not with her opposite number, the Princeton-bound Brandon (Jonathan Keltz), but with her nemesis, the motorcycle-riding rebel Jesse (Thomas McDonell).

Elsewhere in the delightfully multicultural yet strangely bully-free hallways, Mei (Yin Chang) is worried her acceptance at an out-of-state school will upset her boyfriend, Justin (Jared Kusnitz), while star athlete Tyler (DeVaughn Nixon) may have his eye on someone besides his long-time girlfriend, Jordan (Kylie Bunbury).

Katie Wech’s script respects its characters this is one teen flick where parents and teachers aren’t reduced to stereotypes. She and director Joe Nussbaum have a particular affection for the underdogs, like Lucas (Nolan Sotillo) and Corey (Cameron Monaghan), two 1990s-music-loving sophomores, and lovable loser Lloyd (Nicholas Braun), whose name might be an homage to John Cusack’s Say Anything character.

Prom is chaste even by Disney standards: there’s no mention of booze, drugs or sex. But while it’s clearly a slice of middle American wish fulfillment, it never feels condescending. I wouldn’t be surprised if it becomes a tween classic.