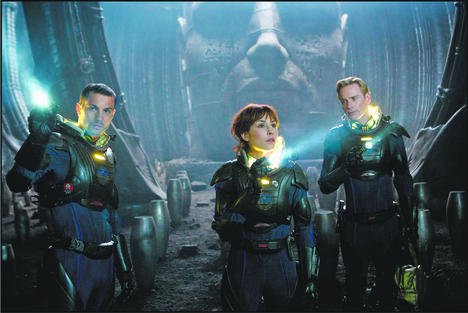 Of all the revelations in Ridley Scott’s Prometheus, perhaps the most astounding is that Scott doesn’t understand his own work.

The producer/director recently told the Guardian that he made this film because no one came out of Alien asking about the Space Jockey.

The Space Jockey, for those of you who haven’t seen Scott’s 1979 masterwork in a while, is the massive extraterrestrial pilot discovered by the doomed crew of the refinery tugboat Nostromo on a desolate planetoid. Long dead, its chest burst open by a cousin of the beastie that Sigourney Weaver eventually confronts in the ship’s lifeboat, it lay in state, implying a much larger mythology behind the film’s ravenous xenomorph.

The problem with Scott’s argument is that no one cares about the Space Jockey, because its story is over long before Alien begins – and once the movie gets under way, everyone’s too busy dealing with the monster on the ship to speculate about its origins. Mythology doesn’t matter when there’s an acid-blooded, multi-mandibled nightmare lurking in the airshafts.

Prometheus doesn’t have much in the way of nightmares. Instead, it’s got a bloated sense of its own importance, beginning with no less significant an event than the creation of the human race. It then jumps forward to the late 21st century, where corporate-sponsored explorers-slash-lovers Elizabeth Shaw (Noomi Rapace) and Charlie Holloway (Logan Marshall-Green) are delivered by corporate exploratory vessel Prometheus to distant celestial body LV-223 in search of whatever it was that got us rolling.

Shaw and Holloway are accompanied on their voyage by a roughneck crew overseen by Charlize Theron’s enigmatic Ms. Vickers and Idris Elba’s appealingly flippant Captain Janek, with Michael Fassbender stealing every scene as David, an android who’s perhaps spent too much of the two-year voyage studying Peter O’Toole in Lawrence Of Arabia.

When they arrive on LV-223, they encounter something very similar to what the Nostromo found in Alien – or will find, since this film takes place a good quarter-century or so before that one.

And then things get dicey, with the characters plunged into a number of very icky situations due to external machinations that will surprise no one who’s seen any of the Alien films. Problem is, they don’t make a great deal of sense here, because they depend on certain characters knowing things they couldn’t possibly know about the extraterrestrials, this being humanity’s very first contact with them.

Once things are set in motion, Scott loses control of his movie after spending 80 minutes or so establishing its cool, sleek elegance. The film explodes into an incoherent rush of action and monsterism, abandoning both the merciless logic of Alien and the clever world-building of the sequels for an ending that – not to put too fine a point on it – makes no fucking sense at all.

I’m furious at how badly Scott and his screenwriters, Jon Spaihts and Damon Lindelof, have botched this project. Prometheus doesn’t enhance or complement the original Alien as much as it builds a video game module onto it: a weightless digital creation that can’t hold a candle to the original’s grimy analog impact.