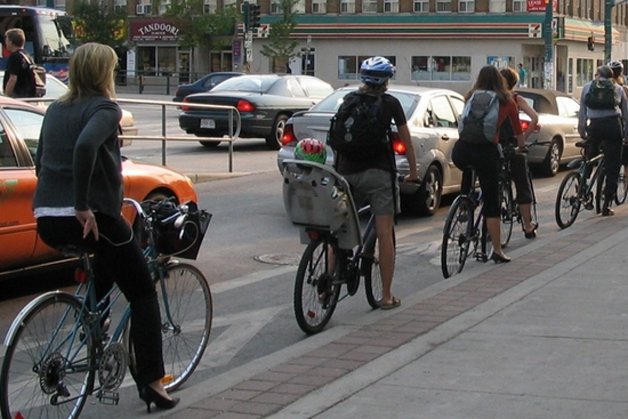 The Ontario Liberals are touting a new cycling infrastructure fund as a major step forward for the province’s bikers, but whether the investment will lead to anything more than minor improvements in Toronto remains to be seen.

At the Ontario Bike Summit on Monday, Transportation Minister Glen Murray announced a three-year, $25-million plan to boost construction of bike infrastructure across the province. Ten million dollars will be allocated to a cost-shared program to help municipalities expand their biking networks, connect with provincial routes, and launch pilot projects, while the remaining $15 million will go to building cycling paths on provincial highways and bridges.

The funding is part of #CycleON, the Liberal government’s 20-year biking strategy. In a press release, Murray said the goal is to “make Ontario the premier cycling province in Canada.”

“We are committed to providing the people of Ontario with safe, healthy, active transportation choices and today we have taken action to make that commitment a reality,” he said in the release.

Toronto’s Public Works chair Councillor Denzil Minnan-Wong welcomed Murray’s announcement, saying the city needs all the help it can get. Cycling is growing in all districts and there are 35,000 bike trips into the downtown core every day.

“There’s an insatiable appetite for bicycling infrastructure,” Minnan-Wong said. “There’s no shortage of ideas where we could invest the money.”

The councillor would like to accelerate existing projects, build more on-street bike lanes, or expand Bike Share Toronto (formerly known as Bixi). The money could also be allocated to cycling education programs, he added.

The new funding comes as Toronto is revamping its cycling priorities. After failing to reach many of the targets set in council’s 2001 Bike Plan, staff are currently working on a revised strategy that’s expected to go to council next year.

Toronto currently spends about $9 million a year on bike projects. It’s not known how much of the new funding for municipalities will be allocated to the city, but given that the $10 million is being divided across Ontario it likely won’t represent a major boost to Toronto’s cycling budget.

That has some cycling advocates arguing that Murray’s announcement falls well short of what’s needed.

Martin Reis of Advocacy for Respect for Cyclists says $25 million is merely a “drop in the bucket.” He points out that Quebec recently spent $200 million on the Route Verte cycling trail, according to the Share the Road Coalition.

“Cycling in Ontario has been neglected by the province for 20 years,” Reis said. They are doing something, but it’s “not serious, not quick enough out of the gate.”

Jared Kolb, executive director of Cycle Toronto, agrees that the new funding is only a “modest gain” given the size of the province.

Instead, Kolb sees policy changes as the most significant moves the government is making to enhance cycling safety. Among them is a bill currently making its way through the legislature that would require the province to construct paved shoulders as part of highway repairs. The shoulders would be one metre wide and marked with signs warning drivers to share the road with cyclists.

“It won’t have as big of an impact here within the city, but for anybody who’s riding in a rural context or small-town context across the province, this is a big change,” said Kolb.

Although that change wouldn’t do much to keep Toronto riders safe, the impact of another bill, the Keeping Ontario’s Roads Safe Act, would be felt here. It would increase the fine for “dooring” cyclists to $300 – $1000 (it’s currently $60 – $500), and would require drivers to keep one metre away from cyclists when passing.

The act has not yet passed, but reached a second reading at Queen’s Park last week.

Minnan-Wong is hoping the province will take up additional legislative changes. He says the provincially mandated environmental assessment process that requires lengthy studies for any major road changes is “torturous” and leads to unnecessary delays in completing bike projects.

The councillor said he talked to Murray on Monday about streamlining the EA process and the minister was receptive.

“The public does not understand why we can make an announcement that we’re going to build bike lanes on Richmond and Adelaide and four years later we got nothing to show for it,” Minnan-Wong said.